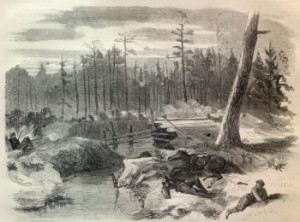 The Union Army is now in control of Jacksonville, Florida and has orders to push inland.

Among the regiments is the African American 54th Massachusetts Regiment, who led the way in capturing Jacksonville on February 7. The presence of black soldiers is a fearful sight for Southern whites of the city and the surrounding countryside. The proximity of black Union regiments encourages slaves to escape from their masters and reminds white citizens that if the North wins the war, the South’s slave-based economy and society will be no more.

Among the citizens of Florida is Maria Baker Taylor, the wife of a wealthy slave-owning planter, John, and the granddaughter of Richard Furman (1755-1825), perhaps the most prominent Baptist in South Carolina earlier in the century. Maria and husband John, their children (numbering thirteen in time) and some sixty slaves (who Maria always refers to as “servants”) had moved from Beaufort to Marion, Florida in 1853. In so doing they were part of a large migration of South Carolina planter families to middle Florida, an area highly suited for growing cotton and in the 1850s known as “little South Carolina.” The Taylor’s named their plantation Osceola, after the famous Seminole chief of the same name (1804-1838).

Until now, the war has touched the Taylor family only lightly, in no small part due to their privileged status. Husband John, exempt from military service as a slave owner in Florida, nonetheless finds some of his goods impressed by the government for the army. In addition, he sells sugar and other supplies to Confederate troops. Only one son, Johnny is serving in the army. Son Willie, while preparing to serve by attending military school, has recently died at the age of eighteen, never having put on a Confederate uniform.

For her part, Maria is a “fervent Baptist, wife, mother of thirteen children, educator of her children and grandchildren, plantation mistress, church worker, voracious reader, and dedicated diarist of her daily life.”

Now, in the third year of the war, the Taylor’s world is suddenly threatened by the Union capture of Jacksonville and the advance of the Yankees inland. Rumors are flying everywhere as the federal soldiers fan out from Jacksonville and engage in skirmish after skirmish, forcing overpowered Confederate defenders to retreat. The main objective of the federals is westward, their advance facilitated by the railroad. Today the western-marching forces approach Lake City and engage in yet another skirmish that serves as a prelude to a larger battle in the days to come.

Maria, still grieving over the loss of son Willie but glad to have Johnny home from the war for a few days, writes of the personal impact of the presence of Yankee soldiers north of their Florida home.

9 Feb., Tues. I fixed up Johnny’s clothes. Gave him two towels and four pairs new socks, 3 colored handkerchiefs and two white ones. He refused to take dear Willie’s clothes. It rained before Johnny returned and I sat up for him till after twelve and had him come to my room by the fire. We heard the Yankees had landed at Jacksonville–5000 strong.

10 Feb., Wed. Johnny and Mr. Dawkins ate an early breakfast and left for Gainesville, Johnny on his way to Savannah to join his command. I got a trunk for him for $80 and a carpet bag in which I had fixed some catsup, sardines, etc.

11 Feb., Thurs. We had intelligence today that the Yankees had captured Baldwin, torn up some of the rail road and were marching on Lake City–their numbers variously estimated. Mr. Broome’s family are in quite a panic, and packing to move off. Mr. Taylor went to Ocala to consult respecting the public safety.

The excitement in the Taylor household continues for days as news of the Yankee advance grows, their anxieties finally calmed later in the month upon hearing the news of a Confederate victory over the federals.