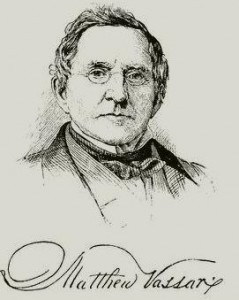 Vassar Female College, a Baptist school in New York founded by the generosity of New York Baptist layman Matthew Vassar but not yet formally opened, is mired in controversy. President Milo P. Jewett shares Vassar’s vision, but has been increasingly fearful that Vassar’s nephews, also involved in the college’s affairs, are undermining the founder’s focus on education by trying to steer his money into the construction of a hospital, a high school, and a public library. The feud between Vassar’s nephew Matthew Vassar Jr. emerged in the open in 1862 when, with both men competing for the blessing and financial resources of founder Vassar, the nephew prevailed in a vote that denied Jewett’s request to hire professors for the college.

Feeling under attack, Jewett in the months following increasingly took the offensive against Vassar Jr. and some trustees whom he came to distrust, including fellow Baptist Rufus Babcock. Seemingly making no headway, Jewett by late 1863 privately disagreed with founder Vassar over when the college should open to the public, criticism that Vassar did not take well.

Finally, this month, Jewett writes a letter to other prominent Baptist trustees, charging founder Vassal as “fickle and childish.” Founder Vassal learns of the harsh letter and, saddened, declares “the impossibility of any further confidence or harmony between” the two. Despite attempts by Jewell to reconcile to the college’s founder, he feels forced to resign two months hence.

Against this backdrop the senior Vassar today addresses the Board of Trustees, his speech including the following paragraph that hints of the college’s internal struggles:

It is in this institution that we are to launch, your reputation as well as mine is embarked, and I invoke a full expression of every individual opinion. Indeed, our reputations are as nothing in the grand success of this scheme, if we equip and direct it as we must for the most distant future. I am willing to take the fullest responsibility of the positions I have advanced; but not in my own favor nor in favor of any other individual or plan whatever, are your deliberate convictions to be expressed or suppressed. If upon any point I seem to be in advance of any of you, that time will not be lost which may be necessary to bring us all abreast.

The struggle over the direction of the fledgling Northern Baptist college is but one of many Baptist subplots underfoot during the war years. In the midst of war many local Baptist institutions of the North advance in fits and starts, their efforts sometimes tripped up by the complexities of the distant war, while at other times yielding success despite the armed conflict.

Vassar College is of the latter: the institution survives Jewett’s resignation and in time becomes a successful educational institution that thrives to the present day.