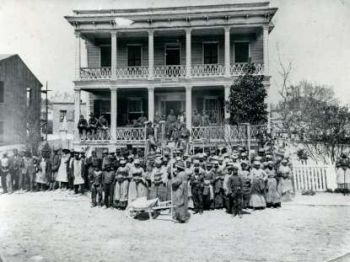 The coastal town of Fernandina, Florida has been occupied by Union forces since March 1862. The capture of the town had proven surprisingly easy. Despite the area’s heavy fortifications, the Confederates had abandoned the city without a fight.

Fort Clinch, guarding the entrance to Fernandina but deserted upon the approach of Union naval forces, was the first United States property seized by Confederate forces that was retaken by the Union.

Nearly two years have passed since Fernandina’s capture, and there is little indication that the Confederacy will ever regain control of the town. Under Union occupation, the town’s economy has suffered, churches have been re-purposed, and Union officers have taken possession of many private residences. The First Baptist Church was the site of a Union Thanksgiving celebration this past November.

Citizens of Fernandina have survived the best they can. Some, in the throes of desperation, have managed to escape.

In today’s Charleston Mercury, the story of one recent escapee from the “Island City” is told.

I have lately conversed with a person who has recently escaped from Fernandina, and have gathered from him the following facts, which may prove of interest to many refugees from the “Island City.”

The town would scarcely be recognized by any of its former citizens.  Most of the fences have been used for fuel, the weather-boarding of the unoccupied buildings has shared the same fate, while the shattered windows, and doors and broken plastering tell a mournful tale of ruin and wanton destruction.  The flower gardens are barren wastes, while the beautiful grove around the Park has been leveled.  The Patton House, Major A. H Coles’ residence, and a dwelling house near the Presbyterian Church, have been destroyed by fire.  The Baptist Church has been converted into a theatre, the Presbyterian Church into an Academy of Sciences, where sundry Connecticut “school marms” are engaged in the laudable occupation of teaching the youthful Ethiopians to sing hosannas in praise of freedom and “Massa Linkum.”  Sammis, of Jacksonville, and another Yankee of the name of Reed, are the Commissioners for the confiscations and sale of real property.  Robinson, of Jacksonville, is the Provost Marshal, and Helper, a brother of the author of the famous “Compend,” is the general overseer of the contrabands.

Most of the property abandoned by the “secesh,” both real and personal, has been disposed of at auction.  Judge Livingston’s and Mr. Dawson’s residences were sold at $5 each, and are occupied by Yankee teachers.  Mr. Yulee’s brought $200, and was purchased by the Colonel of the 11th Maine.  Mrs. Mendenhall’s was bought at $101, by a negro woman named Rachael, belonging to Mrs. Crichton, of St. Mary’s.  Dr. Lesesne’s was bought at $60 by a Mrs. Call, a baker, from Jacksonville.  Col. Coachman’s was purchased at $200, and is occupied by Commissioner Reed.  The brick block, containing Savage and Wilson’s stores, was purchased by Robinson, of Jacksonville, for the sum of $400.  All the iron, trucks, wheels, tools and other materials of the Florida Railroad Company, were bid in to Robinson at $500, and shipped by him to New York.  They were seized on their arrival at that city, by the Yankee Government, and sold at $10,000.  The above prices indicate that the present occupants of Fernandina do not regard the tenure of their ill-gotten property as altogether valid and permanent.

An attempt has been made to cultivate cotton upon the Island, which resulted in a signal failure.  The negro fellows are organized into a regiment, five hundred strong, and are principally employed on Fort Clinch, which now mounts sixteen guns.  A battery, commanded by negroes, has also been erected in front of General Finnegan’s dwelling.  The white troops are encamped on the bluff, between Colonel Dell’s and Duncan Bryant’s.  Swann’s and Coachman’s stores are occupied by the commissaries.  Colonel Dell’s dwelling is used as a hospital for the white, and the Pioneer Hotel is a hospital for the negro troops.  Much sickness has prevailed–many have died, and at times there have not been more than ninety men fit for duty.

The harbor has again been supplied with buoys.  Frisbee, Moony, Briet, Donley, Appel, Ross and Andrew Wightman, all former residents of Fernandina, have been very active in giving aid and comfort to the enemy, and in furnishing information.  Arnett and Farrow are dead.  Phelan, in token of appreciation of his unwearied efforts to supply the Yankees with spiritual consolation, has been decorated with the order of the “ball and chain,” and sent off to recruit his health in the salubrious atmosphere of Hilton Head.

Confederate leaders yet hope to recapture Fernandina, a hope that is not to be realized.