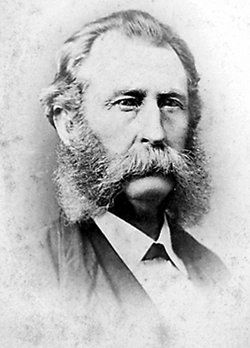 Tennessee businessman and Baptist layman Joseph Alexander Mabry, Jr. (1826-1882), takes the oath of allegiance to the United States of America.

Born in Knox County to a political family, Mabry probably attended Holston Seminary, a Methodist institution, before becoming a land speculator in Knoxville in the early 1850s. Using his political connections, Mabry in 1858 was named president of the new Knoxville and Kentucky Railroad. Early rail lines were being laid when the Civil War broke out. Before the war Mabry was also involved in horse racing, served as as trustee of East Tennessee University (later the University of Tennessee), and was one of Knoxville’s largest slaveholders.

A Democrat and a deacon in the Missionary Baptist Church, during the secession crisis Mabry wavered in regards to calling for secession or peace. When hostilities broke out, the enterprising businessman supplied uniforms and tents for Confederate soldiers. His business sense, in turn, led him to support the Union following the occupation of Knoxville in September 1863. Today, Mabry formally casts his lot with the Union by taking the Oath of Allegiance to the United States.

Following the war, Mabry’s kindness to an influential Unionist prior to Knoxville’s Union occupation is repaid during Reconstruction when the ex-Confederate is treated well under the Republican regime. In the railroad business once again, Mabry briefly prospers before his business fortunes take a turn for the worse from which he never recovers, his life prematurely ending in a gunfight in 1882.