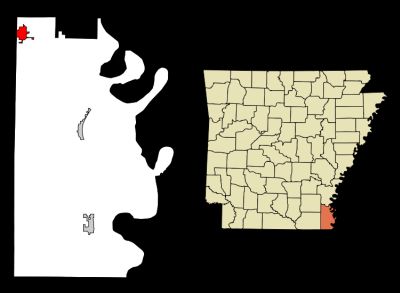 While the Overland and Atlanta campaigns dominate the battlefield news this month, Union forces periodically collide with Confederates in skirmishes in Louisiana and Arkansas as the Federal troops slowly but systematically extend their presence in the western theater of the war.

One such small clash occurs today in the Battle of Old River Lake (also known as the Battle of Ditch Bayou) in the deep southwestern corner of Arkansas in Chicot County. Federal troops, resolutely pushing further southward in Rebel territory, encounter Confederate forces determined to slow the progression of the enemy. The outcome of the skirmish is inconclusive: while Confederate defenders succeed in the goals of inflicting casualties upon Federal forces and slowing the enemy’s advance, the delay is only temporary. During the night, the Federals occupy the town of Lake Village, the county seat, fulfilling their objective. Taking possession of most of the homes in the small community, using many to house injured soldiers. Some houses are lotted, a few buildings are torched, livestock is shot and the newspaper office destroyed.

Lake Village is unreflective of many towns in Arkansas in that large plantations are especially dominant. In 1850 black slaves outnumbered whites in Chicot County by a ratio of almost 30-1, with most slaves living in and near Lake Village. One large slaveowner owned, at one point, over 500 slaves out of a county total of approximately 4,000. Another slaveowner on the eve of the war owned 155 slaves. Altogether, the slave population of Chicot County, located along the fertile Mississippi River, is the largest, by percentage, of any county in the state.

Similar to some other areas of the South characterized by large plantations (and hence large slave populations) prior to the war, including coastal South Carolina, slaves are sometimes allowed to form plantation churches under the watchful eye of white supervisors and laws regulating slave activities.

In 1860 slave Jim Kelley had founded the New Hope Missionary Baptist Church. The land upon which the simple meeting house was erected had been provided by Kelley’s master. The war time years have resulted in the church becoming the primary church for slaves of Chicot County.

As a part of the Union occupation of Lake Village, Federal troops take possession of the Saunders-Pettit-Chapman-Cook Plantation, their presence bringing freedom to many slaves on the plantation, as well as other plantations–many, perhaps most, of whom are Baptists.

In the months to come, Chicot County’s free black citizens celebrate their liberty and begin learning how to live and support themselves as freedpersons. Following the war, the New Hope Missionary Baptist Church serves as the center of community life for black citizens, well into the twentieth century.

The church, its building placed on the National Register of Historic Places in 1992, yet exists as an active congregation.