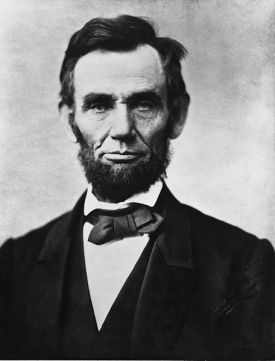 The condition having been met in Louisiana, Tennessee and Arkansas, functioning Unionist governments exist. Congress, however, influenced by Radical Republicans who are concerned that should the war end on such lenient terms, aristocratic planters could return to power and blacks remain enslaved, refuse to admit the three states back into the Union. Radical Republicans, having already met in an alternative convention, have nominated John C. Fremont, a candidate in 1856 and perceived to be harsher on the Confederacy in terms of negotiating an end to the war.

Thus, today’s Republican National Convention is only a portion, albeit a significant one, of the party. In an attempt to attract War Democrats and Border State Unionists in the upcoming November election, today’s national Republican Convention is held (for this year only) under the name of the non-partisan National Union Party, while state parties retain the Republican name. Reinforcing this attempt to attract Border State and War Democrat votes, delegates re-nominate for president the more-moderate Abraham Lincoln and select Andrew Johnson, the Union’s military governor of Tennessee since 1862, as their vice-presidential candidate.

Following his nomination today, Lincoln issues a call for an amendment abolishing slavery. The U.S. Senate has already passed an amendment doing just that, but the House has yet to act upon it. Lincoln’s support of the slavery-ending amendment comes as no surprise to the white supremacist-led Deep South states, as many Southern politicians have been referring to Lincoln as the “black president” since his first election in 1860, which he won on an anti-slavery platform.

Meanwhile in the South, public discussions focused on the providence of God are growing ever louder as providence increasingly appears to have sided with the United States. At stake is God’s sovereignty in the minds of many white Southern divines, including Baptists, whose theological bent is Calvinism. After all, many believe–must believe!–that despite the setbacks of the past twelve months, the Confederacy, God’s chosen nation, is destined to win the war in accordance with God’s will.

Defenses of God’s total sovereignty are regularly put forth by Baptist newspapers of the South, including an article originating in the Virginia Baptist Religious Herald and today re-published in the North Carolina Baptist Biblical Recorder.

The Christian view of the course of human events surpasses the sceptical, as much in comfort as in truth. A great national crisis serves to impress the difference in this respect even on unbelievers themselves; and some of them have been honest enough to confess. Take Dr. Franklin as an instance. In allusion to measures of the British government, which seemed likely to hasten a rupture between the mother country and the colonies–measures which he likened, for that reason, to “the setting up of a smith’s forge in a magazine of gunpowder” he wrote to Whitefield: “I see with you that our affairs are not well managed by our rulers here below. I wish I could believe with you, that they are well attended by those above. I rather suspect from certain circumstances, that though the general government of the universe is well administered, our particular little affairs are perhaps beneath notice, and left to take the chance of human prudence or imprudence, as either may happen to be uppermost. It is now, however, an uncomfortable thought, and I leave it.”

Uncomfortable, indeed! in contrast with the teaching of Scripture, that, whether as respects national or individual interests, “there are many devices in man’s heart, nevertheless the counsel of the Lord, that shall stand”–counsel which presides in such absolute sovereignty over even the fortuitous and casual that while “the lot is cast into the lap, the whole disposing thereof is from the Lord.” We doubt whether our fathers could have fought through the first war of independence, if this cheerless belief, or want of belief, had forced itself on their convictions. We are sure, if it were to prevail among our people now, that the South could not prosecute to a triumph this second war of independence. Oh, let not the cloud that threatens us close over our heads, and shut out from view the hand of a Father holding the helm of our destinies, and while keeping back the things which are most pleasant, giving us what is most profitable for us! So long as we see that hand, hope, though deferred, cannot die, and trust, let trial shake it ever so rudely, must abide immovable.

But half the comfort of the doctrine of providence is lost, if we forget that it is a providence whose ear may be reached, whose arm may be moved by prayer. The cry of penitence, the plea of faith, have power with omnipotence–we had almost said, power over omnipotence. If we “fear the Lord, and serve him, in truth, with all our hearts;” if as a people, we cease to walk “contrary to Him,” He will hear our supplications. We can ask nothing which He will withhold from us–nothing, except he withhold it to grant us something better! Oh, then, ‘avouching the Lord to be our God, to hearken to His voice and to walk in His ways,’ let “thousands and thousands of volleys of prayers, energetic, effectual, fervent, heaven besieging, heaven opening, heaven taking prayers be poured,” for the gift of victory to our armies and of peace to our country, into the ears of “the Lord our Maker, that stretched forth the heavens and laid the foundations of the earth.” These are the “volleys” which are to achieve independence for us–fitting us to receive it–moving Him to bestow it.–Herald.

For all their self-assured passion that they are on the side of “truth” (and have been since the formation of the Southern Baptist Convention in 1845 in order to defend the godliness of the institution of black slavery and use the riches earned off the labor of slaves to save the world), most white Southern Baptists, convinced that independence and freedom is the domain of whites only, probably cannot even conjure up an alternative construct of the war as a war of independence for black human beings, fueled by Christian faith in human equality and led by a great politician (Lincoln) whose abolitionist views originated from the Baptist faith of his childhood.

And yet it is the enslaved blacks (Baptists included) of the South who have truth on their side in a “war of independence” that is far different than that imagined by a people who believe freedom is limited only to persons of certain skin color.