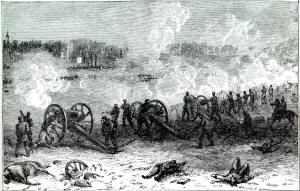 The Battle of Cold Harbor is winding down. Union General Ulysses S. Grant, unable to penetrate Confederate defenses, is making plans to withdraw and grant a win to Confederate General Robert E. Lee. But Grant is not giving up, as he prepares his forces to cross the James River and push closer toward Petersburg, a crucial supply city for the Confederate capital of Richmond.

Grant’s preparations include a distraction in the form of a cavalry raid led by Major General Philip Sheridan into Louisa County, a raid with the dual objective of cutting the Virginia Central Railroad. The raid results in today’s Battle of Trevilian Station, one of the bloodier cavalry engagements of the war. While Sheridan takes the day, on the morrow Confederate forces seize the offensive and win the battle. Union cavalry fall back after destroying some six miles of rails, their objective partially realized. All the while, Grant’s preparations to shift his army across the James River continue unhindered.

I think I wrote to you last, but I presume you will not object to rec. a letter from me again at this time. I will not attempt at this time, Luther to tell you all I have passed through since this Campaign commenced, suffise it to say that through the blessings of God I have escaped thus far all the Battles and Skourmishes through which our Battery has passed, without rec. so much as a scratch with one exception, and then I rec. only a severe bruse. I supose you have heard about it ere this by way of Rachel or Melissa. The particulars of it are this, it hapned at Po River. We were in range of the Rebel SharpShooters, they had already wounded three of our Men. We were Limbering up our Guns. I had hold of the Trail of our (6th Detachment) Gun runing it to the rear to hook it to the Limber when the bullet hit me in the hip passing through a Rubber and Woolen Blanket that hung over my Shoulder and through my haversack through a Pepper Box in my haversack; hiting my Case knife and doubleing all up and cracking it so it broke off afterwords, passed through my haversack, and hit me in the hip, but did not go through my Cloths, it made a black and blue spot larger than your hand and felt for three days as though I was carieng a 10 lb Shot there, but I have got all over it now, it was a Providential escape and I am very thankful to my Heavenly Father for it. Our Battery has been in all the Big Battles and some of the small ones since we started on this Campaign, and have always done our whole duty, and through the Providence of God we have escaped thus far and only had 5 Men wounded, not but two of those very bad, and they not dangerous, one of those is Mr Mooney of Nashua. I do not call it that I was wounded (though many would) for I was not off duty a moment by it though it troubled me some to March and we had conciderable of it to do about that time. Our Battery is in Position now within 700 or 800 yds of the Rebel Breast works, and the little Zippers pass over our heads qwite freqwent, sometimes rather to close for conveniance, for they force us to make our manners, which never like to do to the Jonnies, and do not but a very little. Our Picket or Skourmish line is up to within 100 yds of the Rebel works and they have thrown up Strong Breast works and there is almost continual Poping at each other. They do not dare on either side to show a head, for they are very liable to get them hit if they do. We have got us some very Strong Earth Works thrown up in front of our Battery. the 10th Mass Battery is along side of us. We have thrown or dug us some bomb proofs the Rebes have been useing Morters at our Righ and we did not know but they might throw at us so we built Bomb proofs haveing the time) the Maile is going and I must close. I hope the next time I write to to you it will be from the City of Richmond with the Stars and Stripes floteing over the City. Did you rec. the Soldiers Memorial I sent you. My love to Hellen and your Family. I have rec. several papers you and Hellen sent me. I am much obliged for them, from your
Affectionate Brother T C Cheney
my health is first rate.