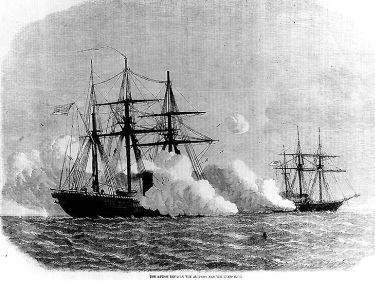 Built at Birkenhead, England, the CSS Alabama is a 1050-ton screw steam sloop of war that was placed in commission of the Confederate Navy on August 24, 1862. Early in 1863 the Alabama sunk the USS Hatteras near Galveston, Texas, then spent the remainder of the year chasing down U.S. merchantmen, seizing some 40, of which many were summarily destroyed. The Alabama’s successes earned the vessel the distinction of being the Confederate’s most destructive ocean raider.

Ill-worn from the many sea battles and forays, the Alabama has returned to Europe for a refit. Yesterday she arrived in Cherbourg, France, and today her condition is being evaluated. Unfortunately, U.S. authorities learn of the Alabama’s whereabouts and immediately dispatch the USS Kearsarge to Cherbourg. Upon the Kearsarge’s arrival on June 14, the captain of the Alabama, Raphael Semmes, challenges Captain John Winslow of the Kearsarge to a ship-to-ship duel.

Winslow anchors offshore and gives time for the Confederate vessel to spruce up a bit. On June 19 the Alabama stokes its furnaces and sails into battle with the Kearsarge, a battle that the superior U.S. vessel wins. As the Alabama sinks, a nearby British yacht rescues Captain Semmes and most of his officers, taking them to England where they avoid capture and imprisonment. The British intervention notwithstanding, the destruction of the dreaded Alabama brings great cheer to many Northern hearts.

Baptists South and North alike have long been faithful to pray for victory for the military forces of their respective nations. Ironically (or providentially?), the North Carolina Baptist Biblical Recorder this week, and less than a week before the Alabama‘s captain from France challenged his Union counterpart to a duel, re-published (with commentary) a recent, short piece from the Boston Courier which described Northern (American) Baptist prayers for the defeat of the mighty Alabama.

The following, from the Boston Courier, will serve to show the state of religion at the North and the estimation in which our noble ship, the Alabama, is held: “At a meeting fo some 500 of the elect in Boston, on the occasion of the late fast, in Tremont Temple [Baptist Church], Rev. Mr. Grymes, Baptist, of this city, rose in the assembly and earnestly requested his christian friends to join in praying for the destruction of the pirate Alabama. He then fell on his knees, and in a very boisterous prayer, asked God to send her ashore high and dry; and if he could not destroy her so, that he would sink her to the bottom of the sea.”

Many Southern white Baptists are certain God’s Providence is on their side, but are these (seemingly) effective prayers of a righteous man (James 5:16) an indication that God is marching–and sailing–on the side of the United States?