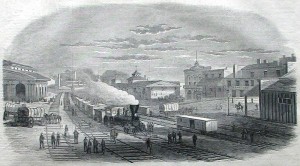 Atlanta During the Civil War

As Federal forces near Confederate General Patrick Cleburne‘s troops who are stationed along a strategic ridge, the general orders his men to dismantle a nearby church in order to use its wood and pews as fortifications. That church is the Gilgal Baptist Church.

The dismantled meeting house serves its purpose well, as the Confederates weather the Union attack and repulse the enemy, all the while suffering significantly fewer casualties than the Federals. Nonetheless, the Confederates’ position is vulnerable, and after darkness they withdraw from their fortifications, leaving behind the splintered and shattered remains of the church meeting house.

Meanwhile, in Virginia the Second Battle of Petersburg begins as the leading edge of Union General Ulysses S. Grant’s Army of the Potomac attempts to capture the strategic city before Confederate General Robert E. Lee‘s Army of Northern Virginia arrives. The Federals, following repeated delays in advancing to Petersburg during the day, finally attack the city in the evening, quickly pushing overwhelmed Confederate defenders backwards. With the capture of Petersburg seemingly in his grasp, Union Major General Baldy Smith, the commanding officer, inexplicably calls off the attack. By the time the offensive resumes the following morning, the Confederates have shored up their weak spots.

When the battle draws to a close on the 18th, the Confederates, having been reinforced by the Army of Northern Virginia, yet control Petersburg. The larger battle for Petersburg, however, is far from over, as it is at this point that the Army of the Potomac digs in and the siege of Petersburg begins.