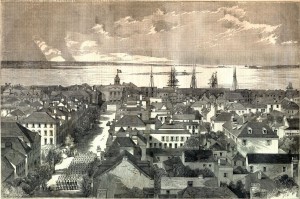 Henry Clay Fish (1820-1877)  is an American (Northern) Baptist clergyman who has pastored in New Jersey since 1846. He has ardently supported the Union effort since the beginning of the great conflict. According to one account, “At the beginning of the civil war he actively supported the National government, spread the flag of the United States on his altar, and caused the National anthems to be sung in his Church services.”

Earlier this month Fish was drafted into military service. Although eager to serve his country, his church members do not wish for their pastor to leave them. The conversation, although unrecorded, must have been quite difficult. Nonetheless, Fish’s congregation prevails, persuading the reverend “with great difficulty to relinquish his purpose, and allow a substitute to be sent in his stead.”

In addition to preaching, Fish is a great proponent of education and missions, as well as a prolific writer. Besides a large number of tracts and sermons, his writing include the books The Price of Soul Liberty, and Who Paid it (1860); Harry’s Conversion (1872); Harry’s Conflicts (1872); Handbook of Revivals (1874); and Bible Lands Illustrated (1876).

Meanwhile, Union naval forces continue pressuring the Southern port city of Charleston, South Carolina. While overshadowed by campaigns in Virginia and Georgia, the drawn-out offensive against Charleston is taking its toll on the old city, as reported by today’s Charleston Courier (and republished in Northern newspapers afterwards):

“SIEGE OF CHARLESTON — THREE HUNDREDTH AND FIFTY-FIRST DAY. — The bombardment of the city continues about the same. Since our last report fifty-six shots have been fired up to 5 o’clock Friday evening. Considerable firing also took place between Battery Gregg and our batteries on Sullivan’s and James Islands. Battery Gregg fired another volley at Fort Sumter last evening in response to the firing of the sun-down gun at the fort. Some few shots were also fired at Sumter during the day. Heavy firing was heard about 10 o’clock Friday morning in the direction of Stone. The cause was not ascertained. The Yankees are still hard at work on Gregg, Wagner and the Middle Battery. No change in the fleet is reported.

We regret to learn that in one of the late battles in Virginia, GILMORE SIMMS, Jr., son of our distinguished author, W. GILMORE SIMMS, was severely wounded.

The reports of the grain crops are very encouraging as to the general result, although here and there we find complaints as usual.”