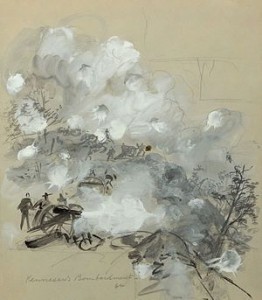 Early this morning Union General William T. Sherman trains his artillery on Kennesaw Mountain in an effort to soften up Confederate General Joseph E. Johnston‘s forces. Since June 19 the Confederates have been entrenched atop the mountain, heavily fortified and, Sherman hopes, by now strung too thin along the ridge to repel an onslaught.

At 9 AM comes the charge. Fighting their way to within yards of the Confederate trenches, the Federals are ultimately unable to draw any closer. By 11:30 AM it is apparent that the defenders have won the day, and the retreat begins.

Three thousand Union soldiers are lost. It was “the hardest fight of the [Atlanta] campaign,” Sherman later conceded. Afterwards, as he has numerous times before, Sherman prepares to move his forces again and thus force the Confederates to do the same.

The New Salem community lies in the shadow of Kennesaw Mountain. Some residents witness the battle; others have fled before this final day of the battle arrives.

Before the war, Baptists of the community worshipped at the New Salem Baptist Church, a meeting house that also serves as the center of the community’s social activities. But like many other buildings and homes, the church house has been decimated by the recent fighting. In the past two weeks Confederate forces used the the meeting house as a field hospital. Then, troops tore down the logs to use in constructing earthworks.

Nearly ten years pass before the New Salem Baptist congregation builds another meeting house, on the same location. Some families who flee the New Salem community this month, however, never return.