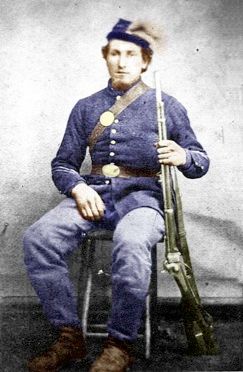 John Fletcher Hamlin from Warren, Pennsylvania is a soldier in the190th Pennsylvania Infantry. Originally having enlisted with the Pennsylvania First Rifles on August 23, 1861, he was 20 years old at the time of his re-enlistment with the 190th.

As is the case with many soldiers North and South, Hamlin writes letters to home during the winter lull in military activity.

Today the young devout Methodist writes a letter to his mother. From his perspective as a Methodist he speaks of army chaplains in the northern armies and makes note of a unnamed Baptist preacher, reflecting the commonly held perception that little separates chaplains of different denominations in the midst of war.

Echoing many Baptist soldiers who write of army revivals, Hamlin describes how the revivals have transformed his regiment from an ungodly group of men to the point where a number of soldiers have become Christians. He also assures his mother that her son, despite the many trials and temptations associated with army life, is living as a good Christian soldier should. It is a letter designed to put his mother’s mind to rest, perhaps as much as a confession of faith.

As with many soldiers, Hamlin’s spelling is far from perfect, but quite readable.

I reseaved your welcom letter day before yesterday and was glad to hear from you also to hear that you are all well that is more than I can say of my self. I have got what the docter calls the Mumps. but I have had the mumps once before havent I, I cannot quite remember but I think so, one of the other boys had the same diseas and he had a hard time of it but he caught cold and that made him worse. yesterday was the first I felt of it and went to the docter this morning and he excused me from duty. I should have been on guard duty today if it had not been for that. you aught to have seen me when I was eating my breakfast this morning. I could not open my mouth only about an inch and it hurt me to chew the worst way, you wanted to know if I had sent my muster in roll to William Blodget, no but I sent him a certificat from Capt Hasard” [included in pension file] “our Division mustering officer (the same man that mustered me in and signed my furlow) certifying that he had mustered me into the service of the U. S. as A Veteran Volentier and that I was credited to the township of Sugar Grove Warren Co. Pa. I sent it nearly 2 weaks ago it mus be thare before this or else it was lost, my box has not made its appearance yet I expect it has been smashed open on the road. I was a fol for not hooping it. thare is lot of boxs come hear that are hooped tight and well nailed that are busted open and another thing, I did not direct it right. I should have directed it to Bristow Station instead of Alexandra. now Mother I must tell you some good news and that is that when I came down hear I did not know as thare was but one singl professes of religion in the whole division besides myself but now I have the names of 17 young men set lone who meat regularly twice every day when not on duty at Chapple of the Christian Commission for the purpos of Worshiping God. The Chapple tent was put up in Saturday febuary 27th, it is crowded and lots stand outside everynight. the preacher is A Baptist but I cant tell the diference betwean him and a Methodist. He is a good man any how thare is no mistake thare was eleven 11 mourner forward last night and thare was three converted night before last, one of them was George Gates one of the boys that made a profession last winter when I was in the Battery. Well Mother I thank you for your advice you may rest asured that I shall try to do my duty both as a soldier and a Christian. I have meny trials and temptations to contend with but the worst enemy I have to contend with is my own deseatful hart. pray for me mother when it was well with you that I may be ever found at my post doing my duty with an eye singely fixed on the crown and to the Glory of God.”

Like many Union soldiers, Hamlin does not survive the war, dying from an injury during the battle of Petersburg in June 1864. His passing from earthly life is a model of the “good death.” His last letter, written days prior to his death, voices common Christian sentiment found among many Union soldiers standing at death’s door. The soldier’s passage to the afterlife, in short, is a point at which denominational distinctions–despite specific references to one’s particular Christian faith–seem to disappear.

Pleas let it be known that I lie in the Lord he is my rock and my refuge this I wright as we ly in line of battle for I feal that should we engage the enemy, I am liable to fall.  I wright this for a testamony to any that as I hope for hapyness hearafter and in the presence of almighty God I do solemnly declair that I am saved and excepted of him and that I feal his love in my poor heart and am ready to die if necessary and that I am a member of the Methodist E. Church and have been for about 9 years.  I also am a member of the Christian Union formed at Bristoe Station, Va last Winter.