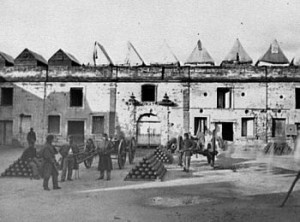 Prior to the war St. Augustine, Florida, a heavily Catholic town named after the fourth century bishop, St. Augustine of Hippo, served as a slave trade center of the Southeast. Augustin Verot, Catholic vicar apostolic of Florida, was as passionate a defender of slavery as were Baptist leaders of the South. His January 4, 1861 sermon, “Slavery and Abolitionism” was printed and distributed throughout the Confederacy, becoming a popular pro-slavery tract.

A Union naval offensive against the state’s coastal towns led to the capture of the city on March 11, 1862. The local slave trade thus eliminated by U.S. forces, enslaved blacks were freed while St. Augustine’s white citizens found themselves cut off from the rest of the Confederacy.

Florida black evangelist Ivey (or Ivy) Barnes seized the moment to minister to newly-freed slaves. From his home in Jacksonville, Barnes traveled back and forth to St. Augustine, leading church meetings in the home of Deacon John Newnan. The gatherings were initially small affairs, impeded by the cautious movements of freedmen as the presence of Union forces in north Florida did not go unchallenged by Confederates.

Eventually the gatherings in Newnan’s home led to the formation of a Sunday School led by Hammie Williams. Of the ten children initially enrolled, seven were Catholic. Some 400 black Catholics lived in the city.

Today, the success of the Sunday School leads to the founding of St. Augustine’s First Baptist Church.

Evidencing his long-time leadership among the city’s black Baptists, Rev. Ivey Barnes is called as the church’s first pastor. The congregation continues meeting in member’s homes until acquiring a lot on the corner of St. Francis and St. Benedict streets. The first meeting house is later constructed, a simple wooden building.

Despite a continuing war-time Union presence in north Florida, life for blacks, both slave and free, during the war is filled with uncertainty. Following the surrender of Confederate General Robert E. Lee on April 9, 1865 at Appomattox, Virginia, Abraham Lincoln’s January 1, 1863 Emancipation Proclamation is read to blacks assembled in Tallahassee, to the west of St. Augustine, on May 20. Many of those listening first learn of their freedom.

While freed by law, many years of racial oppression lie ahead for blacks in Florida. Nonetheless, many generations of north Florida’s black citizens celebrate May 20 as Emancipation Day.

Following the war more black-only Baptist congregations are established. Freedmen have little interest in staying in the white-led, previously desegregated, churches. Their presence in such congregations had at times been compelled and always included restrictions. Now, white supremacy remains despite the abolition of slavery. Separating into their own congregations is the only way to ensure true freedom.

Conversely, white Baptists and other Christians seemingly want nothing to do with the black Christians who had previously worshiped with them, their separatist views exceeding those of blacks. On January 15, 1866 the state of Florida passes a law prohibiting blacks from assembling with whites in church houses and other venues. In the post-war struggle for life and liberty, black churches soon become centers of African American spiritual freedom as well as social, cultural and political advancement.

Not until 1872 does the First Baptist Church construct its first permanent meeting house, a building that yet remains and is listed on the National Register of Historical Places.