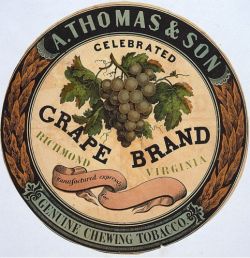 Personal morality is an overriding concern of white Southern Baptists. While black slavery is holy and biblical and killing abolitionists is God’s work, woe to a Southern Baptist church member — whether on the home front or in the Confederate Army — who dances, plays cards, goes to the theater, enjoys other worldly amusements or dares to get drunk.

One of the moral and mannerly admonitions now making the rounds of the Baptist South is a preacher’s story, and hence presumably true. This week the tale makes an appearance in the Georgia Baptist Christian Index.

J. H. Mills, in the Biblical Recorder, gives the following as a portion of the sermon preached by the late Rev. J. L. Prichard, at the dedication of Laurel Grove Baptist Church, Pittsylvainia: “Let all things be done decently and in order. Now I ask you in Christian kindness, would you consider me decent if I should go to, your house, chew tobacco and spit on your floors, your walls and your furniture. Moses, when about to continue with the great I AM, was commanded to put his shoes from off his feet, and the presence of Jehovah made the place whereon he stood holy ground. Now, I ask, will you come up to this house, will you ask our God to meet you here, and then while you kneel in prayer, while you sing the songs of Zion, while you hear the Gospel from the messenger of God, will you so far depart from the holy reverence due to Him whom you worship, as to spit vile juice of tobacco on the floor, on the benches and on the walls of this house?”

Southern Baptist preachers, however, are not the only persons concerned with morality and behavior. Abolitionist Frederick Douglass has long been warning against the evils of tobacco:

Here are two or three hints for juvenile tobacco-chewers:

Tobacco has spoiled and utterly ruined thousands of boys, inducing a dangerous precocity, developing the passions, softening and weakening the bones, and greatly injuring the spinal marrow, the brain, and the whole nervous fluid.

A boy who early freely smokes, or otherwise largely uses tobacco, never is known to make a man of much energy of character, and generally lacks physical and muscular as well as mental energy.

To people older, who are naturally nervous, and particularly to the phlegmatic, tobacco may be comparatively harmless, but even to those it is worse than useless.

We would particularly warn boys who want to be anybody in the world, to shun tobacco as they would a deadly poison.

Nonetheless, tobacco is popular enough that it is provided along with rations to soldiers both North and South. In 1862, the first federal USA tax on tobacco was levied in order to help pay for the Civil War. The tax netted some three million dollars.

Yet proper morals and manners, of course, extend beyond tobacco. Voicing the need for appropriate behavior is a  commentary in today’s Ebensburg, Pennsylvania Alleghanian newspaper announcing the opening of a new local business, a boarding house:

A lady who has just opened a boarding house up town, has pasted up the following “rules and regulations: “The gentlemen must not put their feet on the mantel in the winter nor out of the window in the summer, and no lady must write her name on the glass with a quartz pin. If she uses an air-tight, she must regulate the damper herself and not ring every ten minutes for the chambermaid. The single gentlemen must not play the trombone nor make love to the servants, nor comb their whiskers at the table. If he does, he won’t answer. No lady must turn up her nose at anything upon the table, unless she has a natural pug, and none of the party must drink with a mouth full of victuals nor must they fight for the top buckwheat cakes. Terms liberal, and board to be paid weekly in advance.”