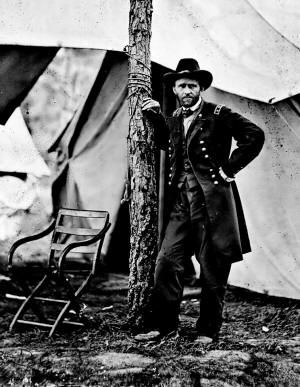 Today the Atlanta campaign begins as troops under the command of Union General William Tecumseh Sherman, numbering nearly 100,000 in totality, pour southward through Ringgold Gap, aiming for the Western and Atlantic Railroad that runs south to Atlanta. Confederate General Joe Johnston‘s forces numbering about 50,000 stand between Sherman and Atlanta. Sherman’s goal is to position his troops between Johnston and Atlanta, thus cutting off the city from rebel protection.

Outnumbered two to one and with no realistic hope of significant reinforcements in the months to come, Johnston has little hope in winning an all-out confrontation with Sherman. Johnston’s objective, accordingly, is to utilize strategic defensive positioning, abetted by north Georgia’s mountainous terrain, to keep the federals away from Atlanta. In the months to come, the fate of the Atlanta will hinge on whether or not Sherman is able to out maneuver his Confederate counterpart.

In Virginia, Lee’s forces are also significantly outnumbered. Lee, however, is a superior general to Johnston, to the extent that his forces are a good match to those of the Union. Yet Lee will need to make best use of his strategic genius, as the fighting in Virginia poses a more immediate danger to the Confederacy than that of the Atlanta Campaign. Grant’s crossing of the Rapidan poses a direct challenge to  Lee by positioning Union forces between the rebels and the Confederate capital of Richmond. Knowing he must quickly take the initiative away from Grant, Lee prepares for battle on the morrow.

Among the hundreds of thousands of troops marching toward battle this day are tens of thousands of Baptists. They bear arms for their respective nations, and they bear arms against one another. Thousands of the Baptists in the armies of the United States are black, most, until recently, having been enslaved in the Confederacy. Now they march forward with eager anticipation, thankful for the opportunity to fight for the freedom of those yet enslaved. Among the Confederate armies are white Baptist soldiers only, albeit some are accompanied by their personal slaves.

One commonality enjoining Baptists North and South is the the conviction that God is on their side. For many, faith in God gives them the strength to march forth into battle.

Race and religion (for Baptists and those of other faiths, Christian or otherwise) both thus play pivotal roles in the major military campaigns that get underway this day, campaigns that, in the months to come, will determine the very fate of the besieged and increasingly desperate Confederacy.