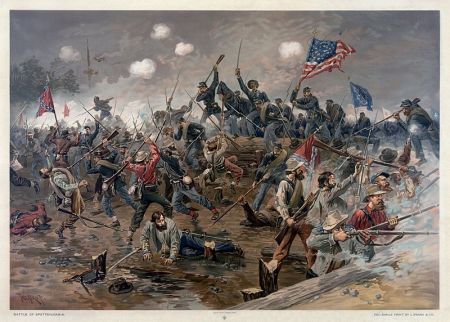 Battle of Spotsylvania by Thure de Thulstrup, 1887, Library of Congress

Today the Battle of Spotsylvania Court House begins, the second battle of the long Wilderness Campaign in which Union General Ulysses S. Grant, with the long term goal of capturing nearby Richmond, Virginia, the Confederate capital, attempts to outmaneuver and wear down Confederate General Robert E. Lee’s Army of Northern Virginia.

Having fought Grant to a standstill in the just-ended and inconclusive Battle of the Wilderness, Lee had correctly guessed that Grant would move his forces to the critical crossroads at Spotsylvania Court House. Beating Grant to the juncture, Lee’s forces entrench and Grant is left with the task of breaking through the fortified Confederate line in order to continue his efforts to reach Richmond. Today the federals attempt to break through rebel forces barricaded on high ground near the crossroads, with no success.

For thirteen more days Grant tries to dislodge the Confederates, the long, bloody battle eventually ending inconclusively with some 32,000 casualties. And once again, Lee’s numerically inferior army suffers a greater percentage of losses than that of the Union army. In the battle of attrition, bloody and deadly that it is for both sides, the Union is gaining the upper hand.

While tens of thousands of men battle in Virginia, a memorial sermon is delivered at the Old Cambridge Baptist Church in Massachusetts. Rev. Cortland W. Anable preaches a discourse in honor of the late George T. and John H. Tucker, two soldiers who gave their lives while serving in the United States Army.

Anable remembers the two as imperfect but brave and admirable men whose Christian manhood should be emulated by others.

The same generous instinct that prompted the disciples to embalm the body of their Lord, has brought us here to-day to pay this tribute of respect and friendship, or the higher tribute still of love, to two of our fellow-townsmen, of whom it may be truly said, that they “were lovely and pleasant in their lives, and in death they were not divided.” These men fell in the service of their country, in defence of the noblest cause that ever rallied noble spirits to the ensanguined battle-field. We honor them for the manner of their death, and are proud to own them as our fellow-citizens. In dying for their country, they have covered themselves with glory; and the halo which rests upon their memory reflects some portion of its lustre on the community in which they lived. Had they come back to us in life, we would have given them a worthy welcome to attest our appreciation of their patriotic services. But coming to us in death, we can only receive them, as is fitting, with such public demonstrations of mourning as are honorable to the living and honoring to the dead. In a certain and important sense they died for us, defending our rights, our liberties, and our sacred institutions. Dead, therefore, must be his heart to the higher and finer feelings of our nature, who does not find in it a chord that beats instinctively responsive to such a lofty sacrifice.

To them, indeed, these services are of no import. Meaningless to them are these tokens of respect, these symbols of solemn mourning, this sad funereal pageant and display. But far otherwise to us. To us they are all so many voices of the heart speaking out its generous sympathy with brave and true-hearted worth. Doubtless this dust would sleep as soundly and securely in the soil of Louisiana as of Massachusetts. Doubtless the archangel’s trump would wake it as surely to a glorious resurrection from the one place as the other. But to us there is a grand significance in these services which we pay. This vast assemblage of friends and townsmen, these badges of mourning, this martial array, this attendance of college classmates and of fellow soldiers of the immortal 38th, this presence in a body of the Irving Literary Association, to pay respect to the memory of the honored dead, these flowers upon the coffin, and those other flowers that will yet be planted on the grave, are all of them emblematic, and enfold, as in a chrysalis, germs of beauty which are among the fairest and loveliest adornments of human character….

…To be a man, there must be roundness and completeness to the development of the entire character.

Moreover, if this be so, then it follows, that, other things being equal, the higher the moral and religious culture, the fuller is the manhood of any given individual.

And when we come to compare these several properties of man, we’ find that there is a regular ascending series of progression; first the physical, then the mental, and, towering above them all, the spiritual and moral. This last, as the seat of the religious sentiments, is that which allies us most closely to our Maker. Hence it is the most important and the most essential element in the composition of true manliness. Now what I claim for religion is, that there is nothing that can take its place as a teacher, guide, and disciplinarian in all the rudiments of a perfectly manly character. Let a man live up to the precepts of Christianity, and his physical nature will be developed and improved ; for religion inculcates temperance, chastity, cleanliness, industry, care of health and habits of body, by attention to which our natural powers are not only preserved unimpaired, but kept in a fitting state for almost unlimited expansion. The mind, too, finds its highest education in the school of religion; where are doctrines and problems which tax the profoundest intellectual energies, ever keeping in advance of each successive acquisition, and reaching out interminably towards the infinite and unknown, leaving something always involved in mystery, something still to discipline and attract to higher efforts and a more finished culture. Indeed, mental training only then begins to take its right direction, when it leads the soul towards the infinite, the mysterious, the incomprehensible of God; for ” the- fear of the Lord is the” beginning of wisdom.” And as for moral culture (the highest and noblest part of humanity), this is an absolute impossibility, in its best developments, without religion. Here Christianity applies its special and peculiar power. This is pre-eminently its own domain, in which it fights its severest battles, and wins its most glorious victories. Christianity enables a man to conquer himself which is better than taking a city. Noble and generous and brave as individuals may be without it, there is not one of them but would be more noble, more generous, more brave for its possession. Under its influence, men who have otherwise no commanding faculties, rise to a dignity of asserted manhood which no mental attainments, no physical powers, nor any combination of qualities, could give. In short, religion is the top-stone of the completed edifice, — the crowning glory of a finished character.

I would say to you, therefore, gentlemen, in conclusion, aspire to the realization in your individual lives of this sublime ideal of manhood. Be true to yourselves, to the better nature with which you were originally created. Let every duty as it arises be performed with unfaltering fidelity to the right. And over every other boasted or coveted excellence of character, place as the crowning glory the illustrious emblazonry of personal religion. And whatever may be the duties to which the emergencies of the hour may summon you, — whether to vindicate your principles at home in the peaceful pursuits of business, or to defend them abroad amid the excitements of clashing arms, — in peace or in war, living or dying, — let the proud determination of every individual be, to show himself a man.

Clearly on display today in the Battle of Spotsylvania Court House and the memorial sermon delivered at Old Cambridge Baptist Church is a Christian manhood that, empowered by the spirit of God, is capable of great bravery in the face of danger and death.

Yet the convictions of Christians North and white Christians South are a world apart, so polarized that only one side can possibly emerge victorious in this bloody war over black slavery. Even as Christian convictions pro and anti-slavery shaped the antebellum era, ushered in the war and now propel this great contest, the war itself is shaping the cult of Christian manhood in such a way that both North and South in the post-war years will in turn be molded by God-believing, battle-hardened, rugged men who emerge from the refining fire of destruction and death.