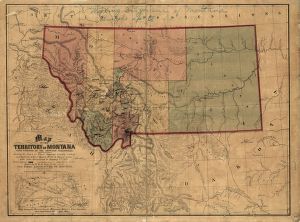 In the wake of the Union loss in the Battle of New Hope Church, federal forces withdraw from the field and once again prepare to place pressure on the Confederates at another nearby location, not the least deterred in the larger objective of capturing Atlanta.

In Virginia, the Battle of North Anna comes to an inconclusive end, the two sides stalemated. Union General Ulysses S. Grant, however, is optimistic that his relentless pounding of the Army of Northern Virginia is wearing down his adversary.

While his armies wage an effective if bloody war of attrition in Georgia and Virginia, U.S. President Abraham Lincoln works on sustaining the United States’ war-time economy. In the midst of an ongoing effort to rush the creation of Western territories in order to facilitate the acquisition of mined gold and silver to help finance the war against the Southern Rebellion, Lincoln today creates the Montana Territory by carving up what has been Idaho Territory.

The boundaries of the new territory are defined as:

These 1864 boundaries remain unchanged when Montana becomes a state on November 8, 1889.

The designation of Montana Territory, however, proves less immediately advantageous to the United States as Lincoln hopes. Territorial instability, due in no small part to a yet-prevailing preponderance of Indian activity, effectively handcuffs Montana’s first governor, Sidney Edgerton, who is soon forced to flee the state due to unrelenting Indian raids.

While western riches provide the resources to support Union armies as they grind their way toward Atlanta and Richmond, Southern Baptist leaders continue their efforts to bolster support of the war among the ranks of common white folk, many of whom are suffering mightily from what they view as a rich man’s war.

Confederate soldiers are deserting in large numbers, returning home to help support destitute families. Food is scarce and inflation is rampant throughout the South. Hope is fast fading among many Southern whites.

North Carolina Baptist Biblical Recorder editor J. D. Hufham writes of the “hardening influence” of war, arguing that those who are better off should have mercy on the poor and hungry.

It is a strange but well attested fact in the history of the human race that the tendency of any great public scourge, such as war, pestilence or famine, is to blunt the sensibilities and harden the hearts of communities which are exposed to its influences. During the prevalences of the plague in Athens when the city, seemingly given over to disease and death, was threatened with utter destruction, the most unbridled licentiousness prevailed among all classes of society. So many changes did they witness among the rich and poor, that no labor was bestowed on any honorable object, as they might be snatched away before it could be consummated. Neglecting all religious observances, and spurning every law, divine and human, they regarded their lives and possessions as held by the tenure of a day, and recklessly gave themselves up to the pursuit of pleasure. The maxim in their hearts was, “Let us eat, drink and be merry, for to-morrow we die.” They scrupled not to be guilty of any excesses, and to perpetuate any crimes, which could give them the means of a fleeting enjoyment; for they calculated that they could not be condemned in the regular course of law, it seeming against probability that the various persons necessary for their conviction and punishment could survive. The same state of things prevailed in London during the prevalence of the plague in that city; and the same results are generally witnessed, to a greater or less degree, in countries which are afflicted with long and desolating wars. Have not the people of this Confederacy suffered in this way already? And may it not be feared that they will suffer still more as the war in which they are engaged drags its slow and bloody length along? The question is worthy of serious consideration.

The war has, in many instances, made great and sudden revolutions in the condition of the rich and poor. The enemy, disregarding the usage of civilized warfare, have appropriated or destroyed private property wherever they have gone. Persons who, on the approach of the dreaded foe, retired from their homes, have, on their return, found themselves stripped of everything; while those who remained at home not only sustained the loss of their property, but also suffered insult and outrage. This is the sad history of all those regions which have been the theatre of actual conflict, or through which the invading hordes have passed. Thousands have thus been reduced from affluence to poverty in an hour; and there is everywhere, in the districts accessible to the enemy, a sense of insecurity, a consciousness that at any moment they may be stripped of their possessions. On the other hand many have suddenly grown rich. The interruption of the ordinary laws of trade; the insufficiency of facilities for transportation; the scarcity of almost all the necessaries of life and the abundance of money have made the accumulation of wealth easy. This state of things has developed, in some persons, a spirit of reckless extravagance, a disposition to enjoy what they have while they can; in others an eager desire to add to their worldly wealth, which has swallowed up every consideration of patriotism, humanity and religion. This latter spirit prevails to a fearful extent throughout the land; and the imminent peril of the country, the pleadings of the widow and orphan, the wail of the naked and hungry poor, the threatenings of the violated law of God have as yet been powerless to restrain it. It has penetrated into every class of society; has brought church members and even preachers of righteousness under its influence. It is sad to contemplate the ravages of this fell spirit among the people, sadder still to think of the results unless it can be checked. Should not every one ask himself whether he is not beginning to yield to its influence, if indeed he has escaped it thus far?

The present is a season of suffering. We meet it on the streets, in our places of business, on the cars, in the public gathering and in the quiet rounds of social intercourse. No one can avoid it now, if he would. Everywhere he meets the needy and distressed, the objects either of sympathy or of active charity. It is a law of our nature that familiarity with suffering tends to deaden our sensibilities and makes us feel less and less, the oftener we are brought in contact with it. If, however, we continue to obey the first promptings of the heart, by efforts to relieve the sorrowing, active habits of beneficence are formed, and we are thus compensated for the loss of feeling which we sustain. The scenes through which we are now passing will, therefore, have one of two effects. They will either foster and strengthen habits of charity and disinterested beneficence, or they will hasten on us a callous, unfeeling selfishness. Should not each one see to it that he avoids the one and secures the other? That this war has brought to light a spirit of liberality and self-sacrificing on the part of many of the Southern people, such as the world has seldom seen, will not be questioned. But it is equally true that there have been displays of sordid selfishness–and they have not been rare–which are disgraceful to humanity.

There is, also, in the present state of things, a strong tendency to lose sight of religious duties. The great events constantly occurring on the bloody theatre of war; the movements of armies; the fate or the consequences of battles; the loss of friends;–these and a thousand other things tend to draw men away from the performance of their duties to God and their fellow creatures. Hence the numerous and sad delinquencies among those who, before the war, sustained a fair reputation for piety.

These are but a few of the hardening influences of which the crisis exposes us. Each one has his peculiar trials and temptations and they will readily occur to the minds of our readers. Let each one strive to overcome them and to quit himself like a christian man in the terrible ordeal through which we are now passing.

Hufham’s litany of persecutions, however, pales in comparison to the persecutions that black slaves have long endured at the hands of their white masters and by being denied their very humanity. The much-lesser tribulations of white Southerners can be brought to a close by simply giving freedom to the South’s slaves.

Blacks, however, are ordained by God to be enslaved, persecuted, sub-human creatures. Whites, on the other hand, are the chosen ones, the people of freedom and privilege, the people to whom belong the wealth generated by the labor of black slaves.

Of these facts white elites are convinced enough that they remain determined to sacrifice the lives of common white folk in order to uphold their ill-begotten wealth.

And so the war grinds on, slowly crushing the soul of the South.

Sources: Battle of Pickett’s Mill (link) and (link); The Battle of North Anna (link) and (link); “Montana Territory,” Wikipedia (link); “Organic Act of Montana Territory” (link); Ken Robison, Montana Territory and the Civil War: A Fronter Forged on the Battlefield, Charleston, SC: The History Press, 2013 (link); “The Hardening Influence of War,” Biblical Recorder, May 25, 1864 (link); The Missionary Jubilee: An Account of the Fiftieth Anniversary of the American Baptist Missionary Union, at Philadelphia, May 24, 25 and 26, New York: Sheldon and Company, 1869 (link); image, Library of Congress (link)