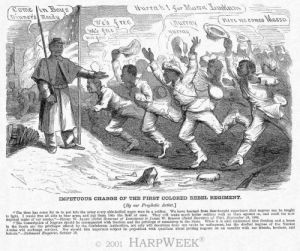 The fortunes of the Confederacy have grown so desperate–some two-thirds of Confederate soldiers have deserted, and there are no more able-bodied white men available for military service–that a growing number of voices are calling for allowing slaves to serve in the army.

President Jefferson Davis, unable to think of any other effective way to supplement dwindling military ranks (attempts to round up deserters and force them to return to military service largely failing), is contemplating the implications of slaves serving in the military. Surely they would expect their freedom should they put their lives on the line. (Never mind confident assertions by politicians, writers and preachers that slaves don’t really want freedom.) Yet the Confederacy is fighting to keep blacks in slavery. In addition, Southern whites have all along maintained that blacks are too simple-minded and physically weak to serve in army ranks. (Never mind that many emancipated slaves have fought valiantly and bravely in Union blue.)

It is a conundrum that strikes at the very heart of Confederate identity–white freedom and black slavery, white supremacy and black servitude. And this day Harper’s Weekly illustrates the conundrum.

While Davis contemplates, this week’s Georgia Baptist Christian Index publishes a letter from A. E. Marsaall concerning a late October meeting that took place in the First Baptist Church of Macon, Georgia, a congregation that before and throughout the war has been publicly vocal about the divinely-inspired nature of black slavery.

Currently, however, the First Baptist Church of Macon is seeking to assist Baptist refugees from Atlanta.

Dear Bro. Boykin.–At the request of several of the brethren who were participants, I proceed to give you some account of the meeting in the Baptist house of worship in this city, on the afternoon of Sabbath last, of members of the First and Second Baptist Churches of Atlanta, who have found refuge in your city.

This meeting appears to have been contemplated for some time by members of each of the aforesaid churches. Rev. H. C. Hornady, pastor of the First Church in Atlanta, conducted the exercises, which seemed to be productive of joy and good feeling to all present. Brethren Toon, White and others freely expressed their opinion, and manifested a desire for the union of the members of both Churches in weekly religious exercises, and that Baptist refugees from other cities and places who may be in Macon or its vicinity, be invited to participate in our meetings; the object of which is to bring into closer acquaintance and fellowship brethren and sisters who, from a community of sufferings, are better prepared to extend to each other the hand of sympathy and comfort.

Bro. Jared I Whitaker, of the First Church, presented, for the consideration of the meeting, the following topics, which met with the hearty and unanimous approbation of the brethren and sisters present.

1st. That the Baptist members from Atlanta will, as far as lies in their power, attend the regular religious exercises of the Baptist Church in Macon.

2d. That the Pastor of the First Baptist Church be requested to invite all the members who may be able, to attend a meeting of that Church for business and conference, to be held in Macon on Saturday before the second Sabbath in November next. (As this is a meeting of importance, it is hoped the invitation will be remembered, and that all who can will attend.)

3d. That the members of both the Atlanta Churches, together with Baptist refugees from other cities and places, unite in a weekly special prayer-meeting to be held (with the consent of the Church) in the Baptist house of worship in Macon, at such time as will not conflict with [services at] the Macon Church. Sabbath afternoon at the hour of three was suggested as the time for these meetings.

Bro. Toon, of the Second Church, was requested to make application for the building in which to hold our meetings.

In accordance with the above recommendation, I invite all our brethren and sisters, companions in trouble, to meet at the throne of grace to make known our wants to Him who heareth and answereth prayer. Brethren, let us not forget, that though driven from our homes, the honor of our respective Churches, as well as that of the cause of Christ generally, is, to some extent, in our keeping.

Many of the Atlanta refugees attending First Baptist Macon may, like Confederate President Jefferson Davis, wonder how much longer the South will be able to hold out against the superior military power of the North.