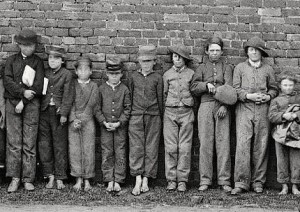 Throughout the war, gangs of boys in the city of Richmond have been fighting one another. The clashes have various overtones including socio-economic divides, racial hatred, and control of neighborhoods. The gangs, which number 30-40, are known by a variety of names coupled with the word “cats,” a term originally used as an insult, but by now a slang for “boys.” Examples include the Butcher Cats and the Hill Cats. Rocks, bricks and sticks are common weapons, and in many instances severe injuries are incurred.

This week a gang battle erupts near Richmond’s Second Baptist Church, as reported by the Richmond Sentinel:

Emmett Ruffin and Thos. S. Dodge were yesterday evening arrested, by officers Chalkley and Griffin, on 6th street, near the Second Baptist Church, while with a good many other boys, they were engaged in a rock battle with some “basin cats.” None of the “basin cats” were arrested, as they fled to their fastnesses on the approach of the officers.

This practice of throwing stones in the streets has become an intolerable public grievance. – Every evening a crowd of boys collect on Navy Hill, and, with slings, stone every negro that passes within two hundred yards of them. We expect to hear of some of the negroes being killed, as even a very small boy can throw a stone from a sling with sufficient force to break the adamantine skull of a negro.

Boy gangs remain a problem for Richmond long after the war ends.