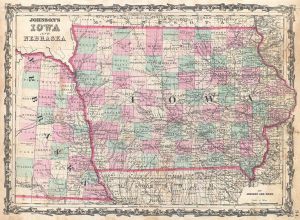 The Confederate’s Army of the Tennessee, led by General John Bell Hood, departs Florence, Alabama today, en route to Tennessee. Altogether, the Rebels field 30,000 soldiers and 8,000 cavalry in the planned invasion of Tennessee. This is the largest Confederate army in the field other than General Robert E. Lee‘s Army of Northern Virginia, currently entrenched at Petersburg in the defense of the Confederate capital of Richmond.

Meanwhile, in middle Georgia the southern wing of Union General William T. Sherman’s army skirmishes with cavalrymen under General Joseph Wheeling, forcing the Rebels back into Macon. Fortunately for the citizens of Macon, however, Sherman spares the city as the march eastward continues.

Other minor clashes also take place throughout middle Georgia. In each case, the Federals prevail.

Meanwhile, far to the North the Baptists of Dubuque, Iowa do their part in supporting the Union war effort. Today the city’s Baptist assist in establishing the local Christian Commission Society, an entity devoted to meeting the spiritual and food needs of Union soldiers. In the weeks and months ahead, provisions and Bibles are distributed to Federal armies via the Dubuque Society, one of dozens, if not hundreds of similar organizations throughout the United States supported by Baptists of the North.

The United States military maintains a strong advantage over Confederate forces partly due to robust local support of troops throughout the country.