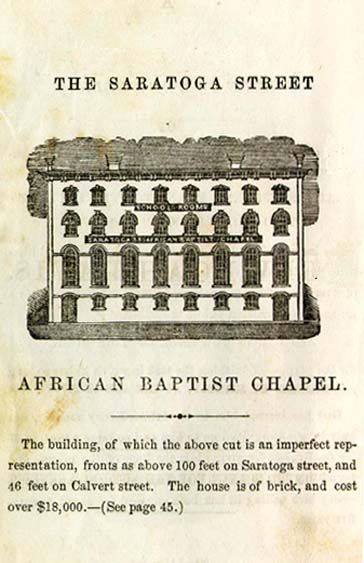 Today the Baltimore Association for the Moral and Educational Improvement of Colored People is formed in Maryland. Supported heavily by Baptists, the organization’s focus is statewide. It is one of many such similar associations formed in the North, as well as in Union-controlled areas of the South, during the second half of the Civil War. The Baltimore organization and other like-minded entities, typically founded as Christian organizations, are devoted to assisting and equipping freedmen for a future of assimilation and prosperity into broader American life.

Founded about 1850 by Rev. Noah Davis, a free black from Fredericksburg, Virginia, the church in 1855 was provided with a meeting house by Rev. William Crane, also a former Virginia resident, and now pastor of Baltimore’s Fourth Street Baptist Church. A long-time critic of black slavery, Crane in 1836 had helped establish the first black Baptist congregation in the state of Maryland.

In 1868 the Baltimore Association acquires a nearby building to house administration and classes, and in 1883 becomes a normal school for the training of black school teachers. In 1914 the school is rechristened the Maryland Normal and Industrial School, and in 1935 is renamed Maryland State Teachers College at Bowie, eventually taking the name Bowie State College in 1963, at which time the institution expands its focus to liberal arts.