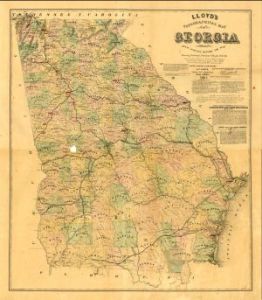 Amidst the restlessness found throughout the Confederacy, Baptists join other white Southerners in lamenting the fortunes of their nation and wondering why God has allowed such prolonged catastrophe to take place.

In Georgia’s Bulloch County, the Lower Canoochee Baptist Association is convened. As in other associational gatherings in the South this month, the war is on everyone’s mind. Canoochee Baptists ponder the mysteries of God’s chosen people falling upon such hard times, and, as do many white Baptists around the South, decide that lack of personal piety is the culprit.

“Reflect for a moment and ask the question,” Canoochee Baptists declare, “why is the Lord’s anger kindled against us, and why has the God of Jacob forsaken us and left us to wail, to weep, and to mourn?”

Seemingly all white Baptists of the South are oblivious to the obvious answer of their universal question. To admit the obvious–that human slavery is an evil in the sight of God, the evil for which they are being punished–would undermine faith and nation alike.

To cling to a lie that brings destruction is better than embracing the truth that will crush cherished ideology.