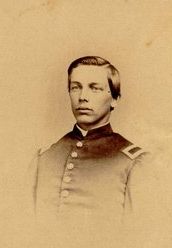 Today Nevada is admitted into the Union as the 36th state. Statehood arrives eight days prior to the 1864 presidential elections, and is earlier than originally planned in order to provide a voting edge for President Lincoln and the Republican Party.

Hurrying Western territories into statehood is a broader strategy utilized during the war and is designed to enhance the stature of the Republican Party and finance the war through the mining of gold and silver. In the case of Nevada, the extra voting power turns out to be unnecessary as Lincoln and the Republicans win handily on November 8.

Meanwhile back East, First Lieutenant Elisha Benjamin Andrews (1844-1917), born in Hinsdale, New Hampshire, musters out of the First Connecticut Heavy Artillery, following a battle wound in August resulting in the loss of vision in his left eye, an eye that is eventually replaced with a glass eye.

Continuing his education upon leaving the army, Andrew becomes a Baptist minister and graduates from Baptist’s Newton Theological Institute in 1874, becoming president at Baptist’s Denison University the following year. In 1883 Andrews accepts a teaching position at Baptist’s Brown University, and in the years following teaches history and philosophy, authoring a number of history volumes.

In 1889 Andrews is selected as the eighth president of Brown, a post he holds until 1898, later serving as the superintendent of Chicago Public Schools and chancellor at the University of Nebraska. Retiring in 1908, Andrews dies in 1917.