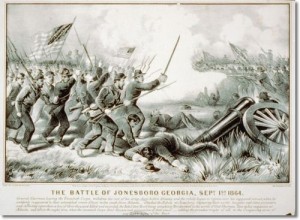 Gloom grows throughout the South as Union Maj. Gen. William T. Sherman defeats  Gen. John Bell Hood’s Army of the Tennessee in the second and final day of the battle of Jonesborough (Jonesboro). Hood’s defeat forces the Confederates to do the unthinkable: abandon Atlanta.

The evacuation begins late in the day, and continues under darkness in the early morning hours of the morrow.

The departing rebels, however, do not leave quietly. Refusing to surrender valuable military stores to the Union, they blow up dozens of rail cars of munitions and surrounding military structures. Anything of potential value to the Yankees, in short, is destroyed. The explosions are heard as far south as Macon, 80 miles distant.

It took five long hours to blow up the seventy carloads of ammunition. The flames shot up to a tremendous- height, and the exploding missiles scattered their red hot fragments right and left. The very earth trembled as if in the throes of a mighty earthquake. The houses rocked like cradles, and on every hand was heard the shattering of window glass and the fall of plastering and loose bricks. Thousands of people flocked to high places and watched with breathless excitement the volcanic scene on the Georgia Railroad.

Some watch, while others flee alongside the army, using whatever means of locomotion available or traveling by foot.

As the Rebels march out of the city, a night of looting begins.

Their hopes crushed, many white Baptists in the South nonetheless remain defiant.

In this month’s edition of the Baptist periodical Child’s Index, one article portrays northerners as early seventeenth century Pilgrims intent upon persecuting religious dissenters – in this case, Christians of the South. From the Pilgrims of 1620 had “descended the Yankee nation, which is now trying to deprive us not only of our religious liberty, but of every kind of liberty.” The article speaks contemptuously of Northern preachers who are now filling the pulpits of churches in Southern areas under Union control.

They refuse to let us have Bibles. . . . They drag our preachers from our pulpits, and send them to prison. They deprive us of our churches, and burn them or use them as stables or store-houses. They send preachers of their own to preach wherever they have taken . . . our towns, and if they conquer us they will take away all our churches… and not even let us pray in our families as we wish. . . . They are blinded by fanaticism and infidelity.

At least some of the complaints voiced above are quite real: in many instances, Northern forces confiscate Southern churches for army use, while the United States ban against commerce with the South prohibits Northern-printed Bibles from entering the South. Yet in other cases, Southern congregations simply abandon their church houses as Union armies move further South. However, charges of not allowing families to pray are a bit dubious. The white Southern belief that the abolitionist North is “blinded by fanaticism and infidelity,” on the other hand, has been a standard line since the beginning of the war.

Yet the attempt to brand Northerners as violators of religious freedom takes place against nearly four years of Southern Christian nationalist rhetoric from Baptists of the South. Having long ago christened the Confederacy as God’s chosen nation and largely abandoned their faith heritage of church state separation, white Baptists in the South nonetheless are well aware of the power of the story of the persecution of early Baptists by colonial theocracies from the early seventeenth to late eighteenth centuries.

Thus it is that with Atlanta conquered and Southern defeat seemingly inevitable, some white Baptists of the South rhetorically and indignantly hold aloft their faith heritage long ago discarded during the war.