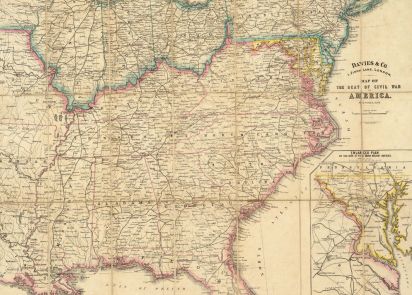 Today is a Sunday, a day observed in the North as one of Thanksgiving and Prayer for the capture of Atlanta and Mobile Bay. Sermons from dozens if not hundreds of pulpits celebrate the significant recent Union victories that have provided much-needed assurances that God is on the side of freedom for all, and that the war is sure to soon be over.

While Northerners celebrate God’s recent victories and great graces this day, the evacuation of Atlanta begins, as agreed upon by Union General William T. Sherman and Confederate General John Bell Hood. Atlanta’s major and councilmen plea with Sherman to change his mind, but to no avail. For the next nine days citizens stream out of the city, during which time some 446 families, representing 705 adults, 860 children and 79 slaves (“servants” in the words of their owners) make their way to Rough and Ready, the end point of the rails under Union control, where they board Confederate wagons and journey to Lovejoy Station, from whence they are free to relocate to Macon.

Many Southern Baptists apart from Atlanta, however, remain defiant. In the First Baptist Church of Augusta–the very church where the Southern Baptist Convention was founded in 1845 on the conviction that white supremacy and black slavery are God’s will for the races–pastor John Lansing Burrows today delivers a sermon entitled “Nationality Insured!”

Within the lengthy discourse, Burrows plumbs the mysteries of God’s ways, decreeing that the Almighty has withheld victory from his chosen Southern nation due to the sins of her people. “Selfish greed of wealth,” “trafficking in their country’s distress,” “Sabbath profamations,” “grovelling drunkenness” and other personal sins he identifies. Slavery, of course, is absent from Burrows’ list of sins.

But, if the citizens of the Confederacy “were, to-day, heartily penitent for their sins–if they were to devote themselves to a pure life of obedience to God’s known laws, all doubts as to the results of this war would be over. As sure as God’s word is true, we should be established as an independent, prosperous and happy nation.”

Drawing to a conclusion, the Augusta pastor names “the most dangerous enemies of our country.” They are not enemy soldiers, cavalryman, or artilleryman. Nor are the Confederacy’s greatest enemies to be found in the U.S. capitol. Instead,

These worst enemies we have to fear are to be found among ourselves. They are those who provoke God’s displeasure against ourselves by wanton violations of His law. You who, in selfish greed, are oppressing the poor, augmenting the general distress and enriching yourselves at the cost of your country’s welfare–you who, in reckless ungodliness, despise God’s commands, profane His name, scorn His law–you are doing more to delay and prevent the hour of peace than the armies of invaders. Will you repent?

The truest friends of the country in this hour of peril, are those who win to our aid the favor of God. How can this be done, you have heard; Now, which will you be? By persistence in sin, help to swell the evil influences that make God our enemy, or, by repentance, prayer and obedience, help to gain His favor?

Can personal piety return God’s favor upon a nation founded upon white supremacy and black slavery? If so, perhaps signs of the Almighty’s blessings can be found far away in Texas, where revivals have been underway for some time now in Baptist life. From the Galveston Weekly News:

Ed. News:–I am happy to inform you that revivals of religion have been numerous in our section of the country for the past few months.  At Mount Zion Methodist Church, (near Sweet Home,) Bro. Buckner Harris and myself held a meeting for nearly four weeks, which resulted in forty conversions and over fifty accessions to the Church

In Hallettsville our Baptist brethren had a revival meeting of two weeks duration.  Result, about twenty-five additions to their Church.

Our meeting at Hallettsville continued eleven days.  Result, fifty-seven accessions to our Church.

At Concrete, Antioch, Orizaba, and other places around, similar success.  Glory to God in the highest—on earth peace—good will to men.

God, perhaps more popular on this Sunday than most, has much to consider in sorting out the day’s competing claims upon His favor–a task that has consumed Him every day of this war of which Baptists (and others) North and South frame as a holy conflict.