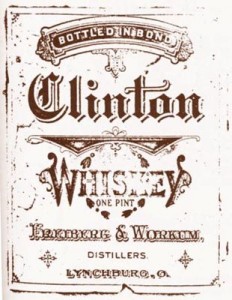 The Civil War has raised a host of issues for white Baptists of the South, a largely rural people who, echoing the early frontier ethos of their spiritual ancestors, frame religion as personal piety rather than social responsibility.

Local church minutes of the 1850s and 1860s are often concerned with personal sins such as card playing, dancing, sexual offenses and drunkenness. Any such lapses on the part of a member is a basis for expulsion, if the offender refuses to repent and change his or her ways.

Conversely, the same church minutes are almost always silent regarding the ills of societal injustices, including slavery. By way of contrast, the abolition, (social) temperance and women’s movements have been present among Baptists of the North since the 1820s.

Prior to the war, few Baptists voiced opposition to alcohol, apart from a strong stance on drunkenness. Most Baptist churches, in fact, utilized real wine in their communion services. Among rural churches, the grapes were typically grown and fermented by a church family as appointed by the congregation.

The war, however, is changing the Southern equation just a bit. While public questioning of the righteousness of black slavery is not yet on the table, and women remain in clearly-defined subordinate and restricted roles, alcohol is receiving fresh scrutiny thanks in no small part to rampant reports of drunkenness in the army camps and the problem of Southern farmers turning their corn into whiskey to sell to soldiers–rather than selling their crops for food at a time when there is great scarcity of food in the South.

Today the Green River Baptist Association of North Carolina addresses this very confluence of a war-abetted hardening of some Baptists’ attitudes toward alcohol. From associational minutes:

The church at Bethel says that, in consequence of the war, the hardness of times, and large amount of tax to pay, some of the members of the church have had their fruit distilled, believing that they could not support their families, and pay their tax without it, and now ask this association for advice in the premises; in answer to which we say distilling, vending and drinking spiritous liquors is the greatest evil the churches have to contend with, therefore we advise that church to exclude those members unless they abandon the practice entirely.

This is not yet the popular view of alcohol among Baptists of the states (North or South), but is indicative of the way the winds are blowing. By the end of the 19th century, Northern and Southern Baptists alike increasingly converge on a prohibitionist, rather than temperance, stance.

For now, however, the matter is simple: alcohol is a problem among the soldiers, and many Christians in the Confederate Army are falling prey to drunkenness, while at the same time profiteers (on the one hand) and desperate families (like the family referenced in the associational minutes) on the other hand depend upon the profitable market for whiskey generated by the army camps.

For at least some churches in the Green River Baptist Association, prohibition seems to be the answer.