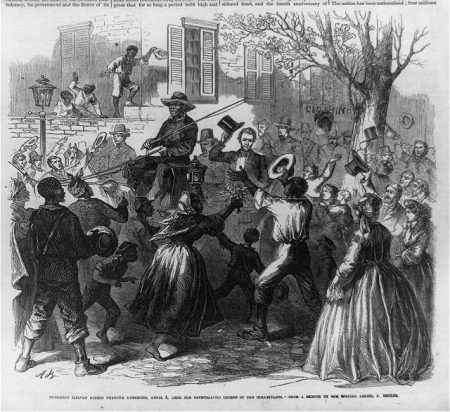 Richmond is fallen, the Confederate capital is no more. Fires smolder. Destruction is everywhere. Federal soldiers and freedmen roam the ruins of the city while many remaining white families are barricaded behind closed doors.

A jubilant U.S. President Abraham Lincoln arrives today with his son Tad to visit the former Confederate capital for himself. Recognizing the president, former slaves swarm around the man who is widely viewed as their Moses.

Admiral David D. Porter, accompanying Lincoln, describes the scene: “As far as the eye could see the streets were alive with negroes and poor whites rushing in our direction….They all wanted to shake hands with Mr. Lincoln or his coat tail or even to kneel down and kiss his boots!”

As Lincoln makes his way toward the former Confederate capitol building, joyful cries of “Glory, glory, glory!” and “Bless the Lord!” ring out. One African American woman, approaching the president, voices the thoughts of many: “I know that I am free, for I have seen Father Abraham and felt him.”

Among the throngs of the newly-freed are thousands of Baptists, the faith with the greatest representation among black Richmonders. Lincoln’s childhood and youth in abolitionist Baptist churches helped instill in him an opposition to slavery, and now he is praised by black Baptists to whom earthly salvation has come.

Reaching the capitol building amidst the crowd of freedmen, Lincoln is greeted by a small contingent of the city’s elites who have remained in the city and who want to discuss how the war might now be brought to a quick conclusion. Following a conversation with the delegation, Lincoln and son Tad continue touring the city, afterwards boarding a Union warship to spend the night. On the morrow peace talks resume.

As Richmond’s former slaves celebrate freedom, former slaveowners throughout the Confederacy are devastated and bitter, the means of their wealth having been ripped from them, and now the capital of their slaveocracy seized by the abolitionist North.

Former Confederate President Jefferson Davis, pausing in Danville as he flees southward, addresses “the people of the Confederate States of America.” Bemoaning Richmond’s fall as a great loss, he insists that “patriots engaged in a most sacred cause” must not “allow our energies to falter, our spirits to grow faint.” “It is for us,” Davis continues, “to show by our bearing under reverses how wretched has been the self-deception of those who have believed us less able to endure misfortune with fortitude than to encounter danger with courage.  We have now entered upon a new phase of a struggle the memory of which is to endure for all ages and to shed an increasing luster upon our country.”

Determining to fight for the freedom and rights of the white race, Davis ends his message: “Let us not, then, despond, my countrymen; but, relying on the never-failing mercies and protecting care of our God, let us meet the foe with fresh defiance, with unconquered and unconquerable hearts.”

Defiance and appeals to the Confederacy’s God aside, any hope of the survival of the Confederate nation is delusional. Freedom for all is emerging, and while future generations of white supremacists in the name of God will resort to terrorism in efforts to destroy freedom, the flame cannot be extinguished.

For now, though, the next task of Union armies is to pursue and force the surrender of what remains of Confederate General Robert E. Lee‘s Army of Northern Virginia.