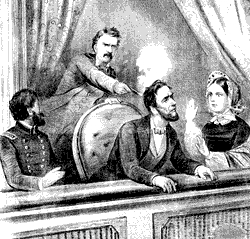 The Martyr of liberty…
(Library of Congress)

Today is Good Friday. On the site of where the war between the states erupted, the former United States flag, the very one that had been removed by the Confederacy on April 12, 1861, is again raised over Fort Sumter in Charleston Harbor in a special ceremony attended by many dignitaries.

General Abner Doubleday, raised a Baptist, is present at the ceremony. Doubleday fired the first shot in defense of Sumter on April 12, 1861. Also present is Robert Smalls of South Carolina, the former slave who made a daring escape during the war and became a national hero in the North. Smalls, a Baptist deacon, becomes a prominent politician during the post-war Reconstruction era.

Baptist minister Charles H. Corey, pastoring the Wentworth Baptist Church (former church of Southern Baptist divine Basil Manly) and employed by the United States Christian Commission, had marched into Charleston with the Massachusetts 54th Colored Regiment when the city fell on February 18. From his office next to the Charleston Hotel, Corey preaches to and works among the colored soldiers and freed persons. The Baptist minister describes today’s flag-raising ceremony:

[Today] was a great day here. Hundreds of visitors were on from the North. The city was alive with excitement. At 10 A. M. the steamers were in readiness to take us to Fort Sumter. Seats and decorations- had been prepared, and hundreds of army and navy officers with invited guests were anxiously awaiting the appearance of the orator, Rev. Henry Ward Beecher. At last he came. Prayer was offered accompanied by the Amens of thousands. Mr. Beecher delivered an impassioned and eloquent oration. The “old flag,” which was lowered four years ago, was then taken from its hiding place and attached to the rope. Major General Anderson delivered a brief and impressive address. The tears were rolling down the old hero’s cheeks. He then proceeded to raise the flag to its place. Such a scene I never expect to witness again. Every heart was moved. I think that there was scarcely a person who did not weep. Then the air was rent with cheers, and the cannon boomed. Every fort that fired on Fort Sumter four years ago saluted the flag, as did all the vessels in the harbor.

I stood on the parapet and witnessed the whole, with emotions not to be described. What increased the depth of the feeling manifested by all was the reception that morning of the news that Lee and his army had surrendered. The next day there was a large meeting which called out thousands of whites and blacks. George Thompson, of England; Judge Kelly, of Pennsylvania; Theodore Tilton, and William Lloyd Garrison, the great Abolitionist, were among the speakers. Such a meeting I have never seen and can never see again, for the circumstances can never occur again. All who spoke gave all the glory to God. After the meeting, the colored children singing “John Brown’s Body Lies a Mouldering,” with waving of handkerchiefs escorted the speakers to the Charleston Hotel. Henry Ward Beecher preached on Sunday to three or four thousand people. Only think, Garrison, Beecher, Thompson, and Tilton speaking here in this city. What changes four years have wrought.

Celebrations throughout the North and among black citizens of the South accompany the flag-raising ceremony.

Just after 10:00 p.m. a single shot is fired in Ford’s Theater in Washington, D.C., on the site of a former Baptist church. A familiar figure crumples over. U.S. president Abraham Lincoln has been shot in the head.

The shooter, John Wilkes Booth, a Confederate sympathizer and avowed white supremacist, leaps to the stage and shouts “Sic semper tyrannis! [Thus always to tyrants]–the South is avenged!,” before fleeing into the night.

Following a period of chaos and confusion, the dying Lincoln is taken to a house across the street from Ford’s Theater, the home of William and Anna Petersen. A manhunt to track down Booth gets underway.

The surgeon general is summoned. He determines that the president cannot be saved. Vice President Andrew Johnson rushes to the president’s side, standing vigil along with several cabinet members and friends of the president’s. Mary Todd Lincoln and the couple’s oldest son Robert wait in an adjoining room, overcome with anguish and grief.

As life slowly drains out of the president who overcame great odds to hold the Union together and extend freedom to black slaves, disbelief, horror and shock sweep over an awakened capital in the early morning darkness.

Anger unlike any other in the history of the nation’s capital, anger that cannot be contained.

There will be hell to pay.