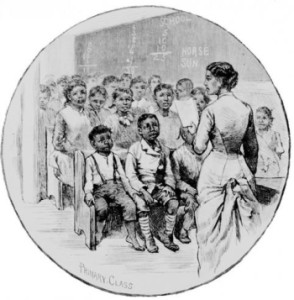 The second Sunday after Lincoln‘s death, many pulpits North and South, with the encouragement of U.S. President Andrew Johnson, focus on the president’s legacy.

In the nation’s capital, the overflowing crowd at the First Baptist Church, through a sermon preached by pastor Dr. A. D. Gillette, remembers the president and absorbs lessons brought about by his untimely death.

“When the Executive head of a great nation falls,” Gillette declares, all are reminded of the inevitability of death. Yet Lincoln’s death “was so sudden, so unlooked for … that we are scarcely as yet awake to the consciousness” that we shall see him no more.

The knell of death has sounded; it sounded first from the steeple of this Church: the authorities of the nation have paid funeral honors to him they officially surrounded, prudently counselled, loved, and respected. The electric throb [telegraph] has sent the thrilling sensation to the extremes of our country, and swift winged ships are bearing it to all the people who live beyond the seas. The lofty form that so recently bowed to welcome the humblest citizen to the nation’s mansion has been shrouded and coffined, and committed to careful hands, to be borne to their home on the prairies, where in less exalted position he was not less loved than here.

“God must be seen above all national calamities,” Gillette reminds his flock and the visitors crowded in the church sanctuary. “We have depended too entirely on man … gave too much glory to man, and not enough to God,” in the midst of war and triumph over the Confederacy. Although a judgment of God has visited the nation,

Let each of us set a Christian example before the world, the best we can do in our lot and station, resolving to contribute the life and heart of one patriot and Christian to the good of our wounded country, and a needy world.

Doing this, we may confidently hope to finish our course with triumphant joy, and go into the possession of a glorious eternal hereafter. With the consecration of the noblest purposes in our heart, and full trust in the merits of Jesus Christ underlying all our purposes, if we must needs be occasionally cast down, we shall not be destroyed. In our personal and national trials we shall see the Lord on the throne, high and lifted up, and His train filling the temple….

A short distance southward in the former Confederate capital, Richmond, Virginia, the pastor of the city’s First Baptist Church, J. Lansing Burrows, also mourns the passing of Lincoln. A number of Union soldiers likely sit in the pews.

We are called upon to-day, by the President of the United States, to assemble in our churches, and give expression to our condemnation and grief, for the terrible crime which has shocked the nation, and hurled the chief of a great people from his high position by an assassin blow. We respond to the invitation, join the nation in its mourning, record our detestation of the crime, and our sympathy with those who suffer. We have no feelings but those of horror and indignation and grief in contemplating this deed of infamy.

This is not to say that Burrows and the the members or First Baptist Church either like or appreciated Lincoln.

Whatever may have been the personal character of President Lincoln, whatever may have been our views of the political doctrines and policy he represented, we have but on voice and one heart, of profound and abhorrent condemnation of the brutal criminality of those, whoever they may be, who are directly or remotely implicated in the atrocious deed. And this I am glad to know, for the honor of humanity and Christianity, is the universal voice of the people of this city and State.

Burrows continues, voicing resignation concerning the outcome of the war and end of slavery as that of the providence of God.

We accept the settlement of these principles by the arbitration of war and by the providence of God; we submit to the government which has been established, as the “powers that be that are ordained of God;” we may even believe that, under the providence and sovereignty of God, the best results, from the whole struggle for the whole country, all things considered, have been attained–that it may prove best that the system of slavery should end, and, like the Mosaic Dispensation, and the grand useful old feudal system, give place to further developments of progressive civilization; we may even accept a centralized nationality, as swallowing up the claims of State sovereignty and yet accepting and believing all this, modestly and consistency might well forbid that we should thrust ourselves into prominence as the eulogists and admirers of the late President. We were honest in our views and in our actions during the fearful struggle; we thought we were right when we sympathized with and aided our State and section….

But that we should justify his assassination, or express or feel any emotion but horror and detestation and grief for such a crime–that be far from us and Christian men.

Baptist freedmen, however, harbor no reservations about the legacy of Abraham Lincoln. In Mobile, Alabama local African Americans gather at the State Street Baptist Church and, while saddened at Lincoln’s death, celebrate their new found freedom of which Lincoln played a pivotal role in bringing about. Together they sing “The Song of the Black Republicans,” a song that expresses thanks to the party of Lincoln.

Free workmen in the cotton-field,
And in the sugar cane;
Free children in the common school,
With nevermore a chain.
Then rally, Black Republicans—
Aye, rally! We are free!
We‘ve waited long
To sing the song—
The song of liberty.

As freedmen of the South celebrate, former Confederate President Jefferson Davis, writing to his wife Varina this day, acknowledges that even “should the spirit of the people rise to the occasion it would not be at this time possible adequately to supply them with the weapons of War.”

Davis continues, suggesting that his family sail for “a foreign port” even as he is considering fleeing to Mexico.

I think my judgement is undisturbed by any pride of opinion or of place, I have prayed to our heavenly Father to give me wisdom and fortitude equal to the demands of the position in which Providence has placed me.  I have sacrificed so much for the cause of the Confederacy that I can measure my ability to make any further sacrifice required, and am assured there is but one to which I am not equal, my Wife and my Children.  How are they to be saved from degradation or want is now my care.  During the suspension of hostilities you may have the best opportunity to go to Missi. and thence either to sail from Mobile for a foreign port or to cross the river and proceed to Texas, as the one or the other may be more practicable.  The little sterling you have will be a very scanty store and under other circumstances would not be counted, but if our land can be sold that will secure you from absolute want.  For myself it may be that our Enemy will prefer to banish me, it may be that a devoted band of Cavalry will cling to me and that I can force my way across the Missi. and if nothing can be done there which it will be proper to do, then I can go to Mexico and have the world from which to choose a location.  Dear Wife this is not the fate to which I invited when the future was rose-colored to us both; but I know you will bear it even better than myself and that /of us two/ I alone will ever look back reproachfully on my past career.