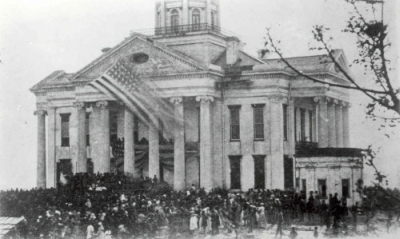 This unidentified 1865 gathering in front of the Warren County Courthouse in Vicksburg, Mississippi is comprised largely of African Americans who may be mourning the death of President Abraham Lincoln in April.

Today Lincoln‘s funeral train stops in Columbus, Ohio, where the president’s body is viewed by some 50,000 persons. Departing at 8:00 P.M. for Indianapolis, in the countryside the train passes many bonfires lit in tribute to Lincoln.

The nation is concurrently following developments concerning Lincoln assassin John Wilkes Booth, killed three days earlier while attempting to avoid arrest, and his co-conspirators. Today’s Harper’s Weekly contains a long analysis of the assassination of Lincoln. Calling April 14 “a dark day in our country’s calendar,” the news journal speaks of Booth as “vile” and not-so-subtly compares him to the biblical traitor of Jesus, the disciple Judas.

Meanwhile, throughout the South freedmen mourn the death of Lincoln to as great a degree as anyone. An administrator with the American Missionary Association today writes of the emotional tides of freedmen and former slaveowners in Florida as news of the momentous events of recent weeks trickles into the state. Many of the freedmen are of the Baptist faith.

But this week, our hearts too were made to rejoice at glorious intelligence [the news of Lee’s surrender] and the Freedmen of this place seemed to feel doubly sure of their freedom which their old task-masters, especially mistresses, seemed to feel for the first time that there were signs of …. [word illegible] and that all was lost! And they wept and groaned saying we shall never have our niggers back again. But when the news of the President’s death came two or three days after, they took heart again-taunting the colored people about their dark prospect of being free and some of our people began to talk of going north to escape enslavement again, for as Massa Lincoln was gone they feared their hope was gone too. But their confidence settled back again into the strong arm of their God, which they said was above all and they would trust Him to carry their cause through.