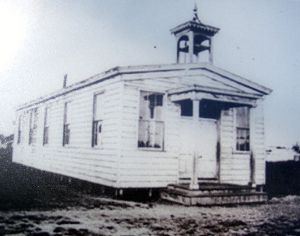 Other than the first year of the war, the South Carolina coast remained under the control of Union Armies during the great conflict, driving white citizens off the large plantations that marked that part of the state. Tens of thousands of slaves fled to their freedom behind the protection of Union lines, where Northern Christians and philanthropists joined with soldiers in teaching the freedmen to read and write, training them for lives of freedom, and helping them acquire rudimentary job skills.

In addition, the freedmen were allowed to utilize the many abandoned white churches, many of which were Baptist meeting houses. As large numbers of freedmen were Baptists, they filled the meetings houses to capacity, and then some. Union authorities also allowed black Christians the options of constructing their own church houses.

Now that the war is over, however, the white owners of the meeting house are determined to reclaim their churches.

For their part, black Baptists have no interest in worshiping with the men and women who for generations unjustly used scripture to sanctify their bondage.

The First African Baptist Church of Hilton Head, established in 1862, had constructed their own meerting house in Mitchelville during the war. This month they relocate to the Chaplin Community and rename their congregation the Goodwill Baptist Church.

As white Baptists refuse to offer any help to their black brethren and sisters, the road ahead is full of challenges. The Hilton Head meeting house, however, like so many other black churches in the post-war years, becomes not only a sanctuary for worship, but the very center of the black community.