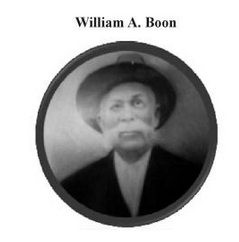 William A. Boon was born on January 15, 1845. Of mixed racial heritage, Boon was born a free man. As a young adult, his skin was light enough that he possibly passed himself off, at times, as a white man.

On August 4, 1864 Boon enlisted in the Union Army and was assigned to the Company H of the First Regiment of the United States Colored Cavalry. Like other black soldiers, he fought to disprove racism yet rampant in the North, and to free the remaining slaves in the South. Boon served in Virginia and North Carolina, engaging in a number of campaigns. Honorably discharged at Cedar Point, Virginia in February 1865, today the veteran is finally recompensed some $100 yet due for service in the Army. In the years following, medical problems plague Boon.

A Baptist, Boon becomes the official photographer of the Stony Branch Missionary Baptist Church, one of few African American photographers of the 19th century.