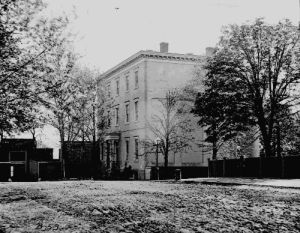 The white citizens of Virginia are busy trying to re-order state, economy and industry. Today, following an opening prayer by Richmond Baptist minister Rev. Jeremiah Jeter,  the Virginia legislature in session reviews bills pertaining to the extension of debts, the repairing and resumption of railroads, the restoration of banks, and the re-stabilizing of various public institutions.

Legislators also complain about their former slaves demanding decent wages to return to the tilling of the fields upon which generations of wages were stolen through slavery. Unwilling to pay fair wages, the Virginia Legislature composes an official appeal to workers of the North:

“Whereas it is our duty, as members of a christian community, and as legislators of a great state, to do all the good within our means, and to increase the wealth and develop the resources of our beloved country: Therefore,

Be it resolved by the general assembly of Virginia, That the scarcity of labor amongst us, the high wages therefor, the fertility of our soil, the salubrity of our climate, and wholesomeness of our laws, being strong inducements, the honest and industrious of all climes, immigrating to our country, are cordially invited to settle amongst us; and especially do we invite the honest, hardy and laboring classes of the north, assuring them that so long as they shall demean themselves as good citizens they will receive the justice, the respect and the kindheartedness of the southern people.”

“Southern people” always refers to white persons only, as freedmen are not worthy of being true and proper people. No matter the outcome of the recent war and regardless what the United States government may enact in terms of racial freedom and equality, Virginia’s elites are determined that as black persons have long been in bondage to the superior white race, in subservience they shall remain, minus the terminology of slavery.

As to inducing Northerners to come and work for a pittance in the conquered South, Virginia’s legislators likely savor the prospects.

Meanwhile in Fredericksburg, the Dr. Lansing Burrows is conducting religious meetings at the (white) Fredericksburg Baptist Church. Such meetings are quick common during these post-war months.