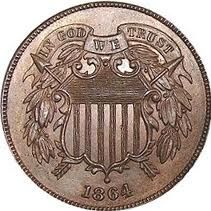 The New York Times responds to the addition, in recent months, of “In God We Trust” on certain United States coins, voicing a decidedly traditional Baptist view of church state separation:

“In compliance with an act of Congress the Director of the Mint has caused the legend “In God we Trust” to be engraved in the dies of the double eagle, eagle, half eagle, dollar, half and quarter dollars, and has had specimens in copper of all these made for the inspection of the Secretary of the Treasury. The Director has made these words subjective to the old mottoes, “E Pluribus Unum,” “United States of America,” &c., which, by right of priority, he thinks, must naturally overshadow our trust in a Supreme Being; while for the smaller coins he rejects the Trust in God altogether, because there is no room for it. This marked slight of the nickels does not speak well for the Mint’s reverence; for when, Mr. Director, do you suppose the masses of the people will see your “In God we Trust” if you confine it to gold and large silver. This new legend may be well enough; but is it quite in place, on the commonest and basest of all human manufactures — the filthy lucre that serves the meanest of our needs? In view of our recent struggle for national life, does it not sound somewhat like a death-bed repentance? Does it not remind one of the significant words of the MASTER, whose estimate of this common medium was expressed in the words: “Whose image and superscription is this?” Without questioning the good motives that led to the enactment of this new form of national worship, we respectfully submit that such tract-printing by the government is always improper, and, just now especially, ill-timed. It reminds one unpleasantly of the “Dei gratia’ of the divine-right schools of Europe. Let us try to carry our religion — such as it is — in our hearts, and not in our pockets.”

Ironically, a Baptist minister in 1861 had initiated the effort that ultimately led to the change of wording on coinage.

Sources: “The New Legend on Our Coins,” New York Times, December 18, 1865 (link); “History of In God We Trust,” United States Department of the Treasury (link)