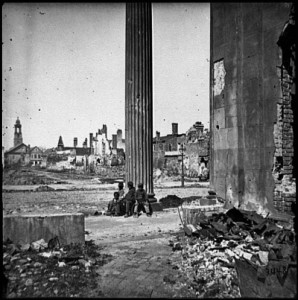 Charleston, after the surrender

Now devoid of Confederate defenders, Charleston surrenders to Union forces without a shot being fired by either side. Nearly two years of besiegement thus comes to a quiet end as the mayor greets Federal troops and control of the city passes to the Union in orderly fashion.

The storied 54th Massachusetts Colored Regiment is among the early regiments marching into the city this day, a city partially in ruins due to the long siege.

Baptist minister Charles H. Corey, working with the United States Christian Commission, enters the city with the Union troops. In a letter he describes the unfolding of this day as impoverished white citizens express relief that their city’s war has ended, while freedom, at long last, comes to enslaved Charlestonians:

All last night our gunboats kept up a continuous bombardment. The air was filled with bursting shells, and the sky was red with flame. This morning calm and beautiful heavy clouds of smoke rose in the direction of the city. The blowing up of heavy guns and gunboats sent echoes thundering from island to island. Orders came to pack and go to Charleston. The sand hills on Morris Island were lined with spectators. The sick and the lame had hobbled out from the hospitals, and in the still morning air stood looking at the dense clouds of smoke hanging over the city. I had been childish with joy all the morning. When I landed, scenes of indescribable desolation were all around me. In the lower half of the city (Gilmore’s town as it was called) stores were open, private papers were blown about the streets, houses were shattered and roofless, streets ploughed up by the bursting shells, and steeples riddled. Pale, poorly clad and hungry people were on the streets. They received us with joy. Men, white as well as black, would come to me and grasp my hand. Sometimes with quivering lips and tearful eyes they would turn away without a word; their hearts were too full for utterance. When we entered the city flour was $1,600 per barrel. A man told me he had paid $200 for five pounds of sugar. A little boy told me that his shoes cost him $400. When a detachment of the Fifty-Fourth Massachusetts Regiment (colored) came along, the scenes I witnessed transcend human powers of description. It was the first body of colored men in arms seen in this city. The boys ran, and old men laughed and cried for joy; hats were swung, aprons and handkerchiefs waved. I saw young women dancing, the older ones shouting and praising God. I stood and wept; so did many a rough soldier; so did some of the citizens of Charleston. The negroes shook hands, and clung to the soldiers and seemed almost wild with delight.

Joyous day turns into a prayerful night, as Corey relates:

That night I found quarters in the west end of the Citadel Building, in one of the very rooms in which secession had been fostered. There the soldiers held a prayer meeting, which can never be forgotten. We had come over from Morris Island, rested and fresh without let or hindrance, and realizing that the war must soon end, there were prayers and thanksgiving such as are seldom heard. I quote from the following letter, written February 20th, 1865: “A happier day I never spent. I could not sleep; the scenes I had witnessed, the words I had heard, were still before me, and the anticipations of the coming Sabbath rendered it next to impossible to get any rest.”