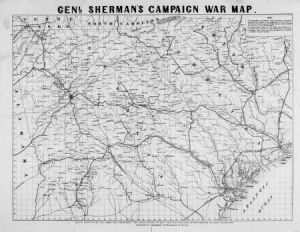 With Savannah under control, Sherman‘s thoughts turn to the Carolinas. In particular, the Union General relishes the thought of conquering Columbia and Charleston, South Carolina, two cities that led Southern agitation for secession. Charleston has already been rendered largely defenseless due to Union bombardments, while Columbia, further inland, remains a critical Confederate hub due to railroads and manufacturing facilities.

Meanwhile, the North Carolina Baptist Biblical Recorder issues “A Call for Volunteers” that does not include soldiers.

Now is a very favorable time for preachers to visit the army. The men are in winter quarters. In many places they have nice log churches in which they hold religious worship and letters from chaplains urge this as a present duty. Brethren Wingate, Hufham, Petty, Carroll and the writer have volunteered to spend a part of this year in preaching to the soldiers. Who else will go? T. H. P.

Further to the South, in the state of Georgia lately ravaged by Sherman, Christian Index editor Samuel Boykin, writing of a vision, attempts to put a bright face on the new year.

All hail to the young year!

What bring you to us, young man? Do you come with the joyous prestige of victory and success on your beaming countenance? Or do sad auguries of evil becloud your youthful face? Do you bring us joy and happiness, victory and glory, triumph and independence? Do you bring cessation from cruel and bloody strife—an end to scars and wounds and agony and death—a conclusion to exposure, hardships, midnight marches and gnawing hunger—a termination to heart aches, tears, disappointments and sad separation? Or do you come laden with continued war and weeping and wailing? Do you bring us the cannon’s roar, the fierce onset, the shriek, the groan, the sulphurous smoke, the rushing blood, the strife of battle sweeping remorselessly over homes and hearts and hopes, and crushing out the life of our young nationality?—Do you bring us more orphanage, more widowhood—more sickness, more sorrow, more distress—more devastation?

Do you bring black drapery wherewith to garb our heavens; or the glorious sunshine of joy for the nation’s great heart? Whatever you bring, we welcome you nevertheless—ALL HAIL TO YOU!

From amid the stars on the midnight breeze comes sweeping down from the orient heavens the response:—

I come from the courts of Omnipotence with such as He chooses to send. I do, indeed, bring you trials and troubles—bloodshed and agony—sorrow and distress. I lift up for you still the banner-flag of freedom, beneath whose folds you are to march through blood and suffering to victory and renown. Learn the lessons which the History of the Past teaches!

First, is the lesson of humility and penitence.

Humble yourselves in the sight of the great God of nations, and, bowing low before His footstool, confess that you are but the creatures of His hand, subject to His will, and deserving sure afflictions because of your manifold transgressions and ingratitude; and repent in sackcloth and ashes of your forgetfulness of Him and his sovereignty, of your disobedience to his commands and the frequent indignities you have heaped upon his administration. Penitently confess that you deserve greater punishment still at his hand; and submit yourselves quiescently to his providence, determining by obedience, righteousness and submission to honor his government and his holy name. Then he will graciously heed your petitions, accept your penitence, repent himself of his anger and turn away his wrath—even as ins the case of Nineveh, that great city.

Second, is the lesson of faith.

God is good to you notwithstanding his chastisements. He has wonderfully blessed your arms and your armies. He has poured out His spirit upon your troops in an astonishing manner. He has upheld your cause for four long years amid disadvantages and disaster; he has united your people wonderfully; he has bestowed fruitful crops upon you; and he has given you a government that has worked smoothly and successfully amidst the most violent throes of revolution—which foes without are seeking to batter down, and traitors within endeavoring to undermine. Your armies are yet bold and defiant, and your people unsubdued in spirit. Your cause is a just and holy one, and will surely end in triumph—

For, Freedom’s battle oft begun,
Bequeathed from bleeding sire to son,
Though baffled oft, is ever won.

Have faith in yourselves—in your powers—in your patriotism—in your endurance—in your ability to cope with your foe—in your capability of winning the most glorious boon that was ere held out to mortal endeavor.—Have faith in your God and in your cause: the one is kind and benignant—the other worthy of all effort, all sacrifice, all suffering.—Such a nation as yours, struggling for independence, cannot be overcome as long as it resolves to be free; and while you know that you fight for all that is right, holy and just, have faith in the nobility of your cause as sufficient to sustain you and your bleeding compatriots, ’till the crimson glare of victory shall illumine the clouds of despondency, and the glorious sun of success disperse the nightshades of war, suffering and distress.

Third, is the lesson of endurance and persistence.

No great crown of glory and honor ever decked a martial brow, without being preceded by the crisis of trial and suffering. No nation ever yet wreathed its brow with laurels of fame, or wrought out for itself a great and glorious nationality, without first enduring woful misery and sorrow. France, in her long and bloody struggles—her Reign of Terror and her wars of desperation—at length reached the topmost round of earthly distinction. Prussia waded through sens of gore, and for seven long years battled with all her powerful neighbors, ere she stepped forth from beneath the cloud of distress, all mangled and bleeding but still gloriously triumphant, into the broad sunshine of happiness and success. England reached her present glory only through ages of fearful struggling and terrible civil strife. Scotland for centuries battled with a powerful foe, ere she won in[d]endence and equality with England. America won her independence under auspices far less favorable or to anything you have been called to endure. The Swiss for hundreds of years fought on, enduringly and persistently, until their independence was acknowledged. So must you do.

Endure, endure, endure all that Providence may see fit to inflict before he gives the crown of victory.

The grey light flickers in through the casement. The dawn faintly tings the Eastern horizon, as the portals of day gradually unfold themselves. One by one the stars are fading from view. Darkness wanes space, and rosy-fingered Aurora hastens to ope the gates of morn. Shadows take their flight, and Old Night flees before the God of Day, who comes rejoicing in the East. All glorious gleam the heavens; and radiantly glistens the earth beneath the sun’s blazing effulgence.

It predicts the rising of our Son of Independence, and presages the greatness of our nation’s glory and happiness.

Thus, even as the Confederacy stares into the abyss of utter destruction, the answer to the South’s salvation remains the same: the cause of slavery is righteous and the South need merely to hold steady to its course, trusting in and being humble before God.

Boykin, as well as many other Southern Baptist elites, cannot but envision a God who is the champion of white freedom and black slavery, a God who will ultimately bless with lasting independence His chosen Southern nation established upon the pure and holy religion of inherent racial inequality.