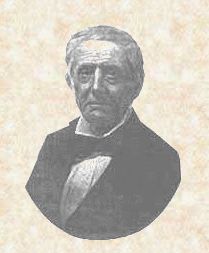 The Confederacy is losing the war, but the entire American nation is suffering. This week, long-time Kentucky Baptist layman and former state politician Leonard Stephens (illustration) writes his brother William (now living in Missouri), bewailing what the war has wrought in his home state.

Stephens letter offers insight into race relations as the end of slavery draws nigh.

…. You give my Dear Brother a rather disponding account of matters in your State. I would fain wish that yours was the only section of the country that was likely to suffer from the deplorable conditions of our once happy & prosperous country, because then the damages could be repaired by those who had not suffered, but it is not so. I am three hands worse off than I was eight months ago. First Julius went after being drafted & I expected & intended to pay him out for he at first insisted that I should buy him off, but others interfered and got him to go. His career was short lived for I suppose he was killed at Bourbridge’s first fight at Saltville. I had no doubts of it for some time tho it is recently said there had been accounts he was not. Next, Jerry took it into his head to go, he went to Covington & they employed him in the Government Stables there, he after being there about ten days came home as I supposed to stay, but only stayed one night, then went back, walked down there in the forepart of the day, and dyed about Sundown that evening. The Statement was that he was lifting some sacks of grain that were unhandy & that in straining at one he fell back and only breathed a few times. I as little expected Jerry to leave home as I expected to leave myself for I know he was not fit for the service & then he had as easy a time at home as any one ought to have desired. He worked as he pleased & all his real wants were supplied. There was certainly some hallucination that is inexplicable. When we heard he was dead Tom went down and altho he was buried had him taken up & brought home & buried in the negro burying ground here. Ligh went off about the same time and enlisted for three years & is in the service somewhere. I have yet at home Tom, Landy, Moses & Henry but how long they may be here is as I think wholly uncertain. There is a nother draft ordered to take place on the 15th of Feb & two or three of them are liable to be drafted, & substitutes are now so high as to put it out of the question to hire them, & indeed they are now staying with an expectation of being paid for their services, so that they are really no longer slaves but hired servants….