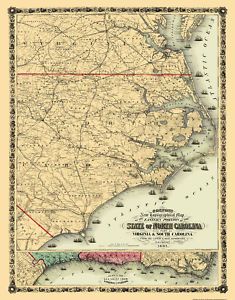 Unsuccessful in an attempt to take the coastal North Carolina fort last month, Union forces are better prepared this time around. The amphibious assault begins in the early morning hours and includes colored regiments. As with most all colored regiments, Baptists are well represented among the troops.

The Federals come ashore with little resistance from Confederate forces. By nightfall, the beach is firmly under Union control.

This week’s Georgia Baptist Christian Index, meanwhile, once again raises the question of what Southern sins have caused God to punish the Confederacy. And as always, the institution of slavery does not make the list.

As God seems to have withdrawn His gracious presence from our hearts and churches, and is smiting our land with the scourge of terrible war; as He is withholding from us His favor and loving-kindness, it becomes us to ascertain, if possible, the great sins on account of which He is so justly and severely punishing us, to seek repentance and pardon, and at once to abandon them. A recurrence to the Divine displeasure in the past may throw some light on the present….

The writer concludes that the sins of the love of wealth, idolatry, unchastity, forsaking Christ and murmuring are too common within the Confederacy.

…. With deep humiliation of soul, let us repent of and forsake these glaring sins, and turn unto God and seek His visible favor, and He will bless us.

Over a year has passed, however, since God’s blessings upon the Confederacy have been evident on the major battlefields of this drawn out war.