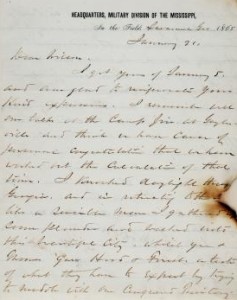 More than two years have passed since U.S. President Abraham Lincoln issued the Emancipation Proclamation. Since that day, emancipation of slaves has come about bit by bit, and is yet far from complete.

Today the latest chapter in this ongoing saga takes place in Kansas City, Kansas, where the city’s remaining black slaves are emancipated, a number of Baptists included. Parades, music and cannon fire celebrate the arrival of freedom.

Meanwhile, even as some of U.S. General William T. Sherman‘s troops have already departed Savannah in advance of the main body, today Sherman pens a letter signaling that he is about to leave the city in full force.

Sherman’s desination is South Carolina, and there is much anxiety among South Carolinians as to the general’s route. Baptists of the state have differing expectations: many white Baptists fear for their livelihood and lives, while the thousands of remaining enslaved black Baptists eagerly anticipate the arrival of freedom that accompanies the coming of Union armies.

Headquarters, Military Division of the Mississippi,
In the Field, Savannah, Geo 1865
January 21,

I got yours of January 5, and am glad to reciprocate your Kind expressions. I remember well our talks at the Camp fire at Gaylesville and think we have Cause of personal Congratulation that we have worked out the Calculation of that time. I knocked daylight through Georgia, and in retreating to the s[outh] like a sensible man I gathered up some plunder and walked into this beautiful City, whilst you & Thomas gave Hood & Forest, a taste of what they have to Expect by trying to meddle with our Conquered Territory. Kirkpatrick did very well and by Circling round pretty freely he Completely bamboozled Wheeler and so befuddled Hardee that he had no idea what was going on. – It is time for me to be off again for Columbia, but it has been raining hard and the Country is all under water, but I will soon be off. Kirkpatrick will have to keep close to our Infantry as Wheeler has a superior force but Kirkpatrick did whip him fairly at Waynesboro and thinks he can do it [ag]ain. I want Thomas to make the trip to Selma but can only give him general instructions.

I know that there is plenty of Forage in Alabama after you get 60 miles south of the Tennessee River all along down the Tombigbee and Black [Rivers] to arrive in large fields of Corn last fall, also below Talladega on the Coosa. The proper Route is from Decatur & Eastport to Columbia, then Tuscaloosa, Selma, and up the Coosa or Tallapoosa to Rome….

My route north is well inland