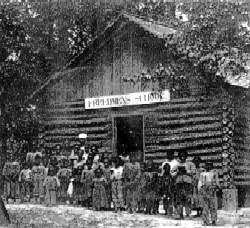 Tensions between Southern white citizens and freedmen show no signs of abating.

From Virginia to Texas, a tug of war is unfolding between Northern (American) Baptists who are aiding freedmen, and Southern Baptists who resent the meddling of Northerners.

Today in Natchez, Mississippi, four black deacons of the Wall Street Baptist Church petition U.S. President Andrew Johnson to turn over the church house to loyal members of the congregation.

Four black deacons of a congregation originally “composed of white & Colored members” report that when the Rebellion began, the meeting house was closed for two years, and “we had to do the best we could in getting a p[l]ace to worship God in.” The Union forces opened the church, partly to preach to the soldiers, and partly to gather a white audience. They soon discovered, however, “that our citizens was such strong Rebals that they would rather hear the Devil than a yankee.” “When all efforts to gether white audience failed,” E. G. Trask, agent of the Baptist Home Mission Society, allowed the deacons and other black members to return, but “we know not how long it will be so.” If “preferance” is to “be given to Unionest above Rebals, we the colored members … are entitled to it.” Therefore, they petition the president to turn over “the Meeting house & ground [to] only loyal members.” Signed by Edward Claton, Tony Jones, Daniel Holley, and Henry Johnson, who represent “between 80 & 90 Members.”

On July 15, the Freedmen’s Bureau in Mississippi orders “the meeting house turned over to the petitioners.”