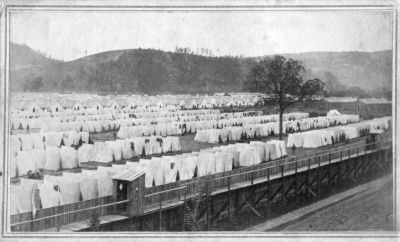 The Elmira Prison Camp in Elmira, New York opened July 6, 1864. The buildings used by the camp had earlier been utilized for the training of Union troops.

The prison quickly became overcrowded. With the onset of winter, many Confederate prisoners yet lived in tents. Unaccustomed to the harsh weather, many became ill or died. Spring floods proved deadly as well, contaminating prisoners’ drinking water. A scarcity of food led many to catch and eat rats. Some prisoners came to refer to the camp as “Hellmira.” Amidst criticism, U.S. military officials and local leaders downplayed the problems.

This week the prison shuts its doors, bringing a closure to the controversial facility. Within months the prison is demolished and land returned to farm land. Not until many years later does the truth of the extent of the horrors at Elmira Prison become fully known.

Nearly 3,000 Confederate soldiers perished during its year of operation, many buried nearby and behind the land of local farmer John W. Jones in what became Woodlawn Cemetery. Jones supervised the burials and kept careful records of each deceased soldier, placing wooden markers on each grave. The U.S. government paid Jones $2.50 for each burial.

Jones is a member of the First Baptist Church of Elmira, where he is sexton and also an usher.

At least one church member was a part of the Underground Railroad active in the town during the war.