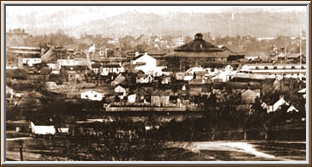 Of all the Southern cities that the Union occupied during the war, Alexandria, Virginia endured the longest under federal control. For four long years the citizens of the city lived under military rule. This month, finally, the office of military governor of the city is abolished.

Holding the office during most of the occupation was General John P. Slough. Before the war Slough served in the Ohio legislature, then moved to Denver in 1860. Initially serving in the Western theater of war as a colonial in the 1st Colorado Infantry, his service carried him east where he was appointed a general and given charge of Alexandria.

Under Slough’s supervision the Baptist church was turned into a hospital. The meeting house is still not fully repaired.

Relieved of his duties on July 7, today Slough writes a letter to the citizens of Alexandria, prior to his return to Colorado.

A – to me- pleasant relationship is severed.

I return to my home in the Rocky Mountains, there soon, I hope, to resume civilian pursuits.If in the discharge of my duties here I have benefitted you, I am content. I have labored for this result. I shall ever remember with pleasurable emotions, my three years’ sojourn in Alexandria.

I now say ‘Good-bye’ with earnest wishes for your happiness and prosperity.

Whether or not the citizens of Alexandria viewed Slough’s governorship as pleasant is another matter.

Once settled back in the West, civilian life apparently does not suit Slough all that well after all, as he accepts an appointment as chief justice of New Mexico Territory. Unfortunately, he does such a poor job in this capacity that he is assassinated in December 1867 by a member of the territorial legislature.