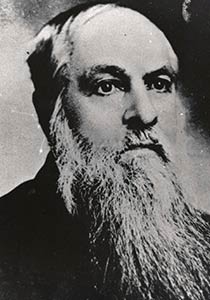 New Hampshire native and prominent son George W. Hubbard (1841-1924) pursued ministerial and scientific education prior to the war. Upon earning enough credentials he began teaching school near his home of North Charlestown.

After several years of teaching Hubbard volunteered as a delegate and missionary chaplain with the United States Christian Commission, a non-denominational organization tasked with assisting the Union Army. Following six weeks of service with the Potomoc Army near the battle front in Virgina, he was assigned to General William T. Sherman‘s army as a chaplain.

With Sherman’s army Hubbard was present at the siege of Atlanta, after which he went to Nashville and accepted a temporary assignment as a teacher in a school housed in Nelson Merry’s Baptist Church, an African American congregation. Soon, his assignment was extended for the remainder of the school year.

This month Hubbard is invited to teach soldiers of the 110th United States Colored Troops in Huntsville, Alabama. He remains as a teacher with the 110th until they are mustered out of service in February 1866.

His assignment is extended for an entire year. In July 1865 Hubbard is invited to teach soldiers in the 110th United States Colored Troops stationed in Gallatin. He joins the soldiers and in October goes with the regiment to Huntsville, Alabama, where he remains until the unit is mustered out of the service in February 1866.

Afterwards Hubbard continues his career in education, including a stint with the Freedmen’s Aid Society in Pittsburgh. He settles in Tennessee, earning degrees from the University of Tennessee and Vanderbilt University, receiving a medical degree from the latter in 1879.

During this time he helps open the Meharry Medical Department of Central Tennessee College, and then serves for for 40 years as president of Meharry Medical College, a black medical school which, under Hubbard’s leadership, becomes an outstanding institution in the South.