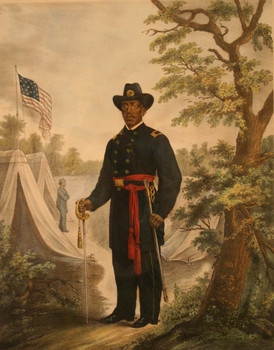 He is also a writer, editor, doctor, and politician, having worked alongside Frederick Douglass in editing the abolitionist newspaper, North Star.

During the war Delany served as a major, the U.S. Army’s first black field officer. Upon the conclusion of the great conflict, he was assigned to South Carolina.

Along the South Carolina coast Major Delany works with freedmen. His job is to help transition freedmen to productive lives.

He is also determined to instill black pride among his charges.

Today Major Martin R. Delany delivers a speech to some five hundred freedmen on St. Helena Island. His “Slavery is Over Speech” is an effort to uplift and encourage freedpersons, many of whom are Baptists.

I want to tell you one thing. Do you know that if it was not for the black man this war never would have been brought to a close with success to the Union, and the liberty to your race? I want you to understand that. Do you know it? Do you know it?…

… People say that you are too lazy to work, that you have not the intelligence to get on for yourselves. They have often told you, Sam, you lazy nigger, you don’t earn your salt…. He never earned a single dollar in his life. You men and women, every one of you around me, made thousands and thousands of dollars. Only you were the means for your master to lead the idle and inglorious life, and to give his children the education which he denied to you for fear you may awake to conscience. If I look around me, I tell you, all the houses on this Island and in Beaufort, they are all familiar to my eye, they are the same structures which I have met with in Africa. They have all been made by the Negroes, you can see it by their rude exterior. I tell you they [whites] cannot teach you anything, and they could not make them because they have not the brain to do it….

Now I look around me and I notice a man, bare footed, covered with rags and dirt. Now I ask, what is that man doing, for whom is he working? I hear that he works for 30 cents a day. I tell you that must not be. That would be cursed slavery over again… I tell you slavery is over, and shall never return again. We have now 200,000 of our men well drilled in arms and used to warfare, and I tell you it is with you and them that slavery shall not come back again, and if you are determined it will not return again.