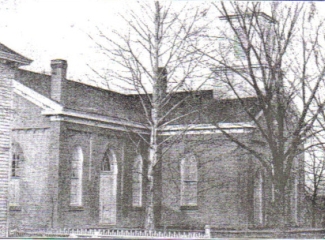 At the “Old Temperance Hall” on South Main Street in Pinckneyville, Illinois, a new Baptist church is formed this day.

Nine persons, four men and five women, are the founding members of the First Baptist Church of Pinckneyville. Like many churches formed immediately after the war, progress is slow. The congregation meets in the Temperance Hall until December 27, 1868, when “on this day our new house of worship was dedicated.” The church remains active to the present day.

Also this day, Major Ezra Palmer Gould (1841-1900) musters out of the 57th Massachusetts Regiment. Having enlisted October 1, 1861, Gould is a survivor of many battles, including wounds from the Battle of the Wilderness.

In September Gould enrolls in the Baptist Theological Institution at Newton, Massachusetts. Upon his graduation in 1868, the former military officer is ordained to the ministry in the Old Cambridge Baptist Church and appointed as a professor at his Alma mater, remaining until 1882, his leaving due to doctrinal concerns. From 1884 to 1888 he pastors the Berean Baptist Church in Burlington, Vermont, resigning apparently due to doctrinal concerns on the part of the congregation.

Afterwards Gould becomes an Episcopalian minister, remaining of that faith until his death in 1900.