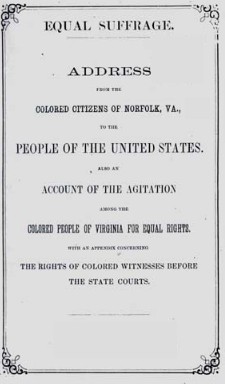 The new paradigm of Southern freedom poses a challenge for white citizens. Following two centuries of enslavement, blacks, now free, have little interest in maintaining close associations with whites. At the same time, a general lack of education, housing and jobs among freedmen ensures that relations with whites will have to continue, at least to some degree.

Many abolitionist white Northern Christians, Baptists included, are eager to help equip Southern blacks for their new lives of freedom. Their help is appreciated.

White Southerners, on the other hand, do not want Northerners helping the race they hope to yet keep in servitude. For generations they publicly insisted that their black slaves were happy and contented, proclaiming that good relations existed between the races. Seemingly ignoring the fact that millions of slaves fled to freedom behind Union lines during the war, and that none now have an interest in remaining slaves, white Southerners, Baptists not the least, are doing what they can to keep Northerners from turning their black people against them.

Meeting today, delegates of the Baptist General Association of Virginia pledge “to resist and counteract all influences tending to alienate the confidence and affections of this class of people [freedmen] from the white population.”

Such rhetoric from white Southern Baptists fools no one but themselves. Even now, Richmond authorities are committing crimes against freedmen, including the widespread raping of black women, a practice carried over from the days of slavery.

While white Virginians simultaneously spite Northern whites, proclaim the affection that black citizens have for their former masters, and mass rape black women, “colored citizens” of Norfolk, Virginia meet in the Catharine Street Baptist Church to discuss the present persecutions visited upon them and organize a committee to advocate for their legal rights.

The committee of black leaders thus appointed crafts a report on “Equal Suffrage” addressed to “The People of the United States.”

In part the report states:

The people of the North, owing to the greater interest excited by the war, have heard little or nothing, for the past four years, of the blasphemous and horrible theories formerly propounded for the defence and glorification of human slavery, in the press, the pulpit and legislatures of the southern States; but, though they have forgotten them, let them be assured that these doctrines have by no means faded from the minds of the people of the South; they cling to these delusions still, and only hug them the closer for their recent defeat. Worse than all, they have returned to their homes, with all their old pride and contempt for the negro transformed into bitter hate for the new-made freeman, who aspires to the exercise of his new-found rights, and who has been fighting for the suppression of their rebellion. That this charge is not unfounded, the manner in which it has been recently attempted to enforce the laws above referred to proves. In Richmond, during the three days’ away of the rebel Mayor Mayo, over 800 colored people were arrested, simply for walking the streets without a pass; in the neighboring city of Portsmouth, a Mayor has just been elected on the avowed platform that this is a white man’s government, and our enemies have been heard to boast openly, that soon not a colored man shall be left in the city; in the greater number of counties in this State, county meetings have been held, at which resolutions have been adopted deploring, while accepting, the abolition of slavery, but going on to pledge the planters composing the meeting, to employ no negroes save such as were formerly owned by themselves, without a written recommendation from their late employers, and threatening violence towards those who should do so, thereby keeping us in a state of serfdom, and preventing our free selection of our employers; they have also pledged themselves, in no event, to pay their adult slaves more than $60 per year for their labor, in the future, out of which, with characteristic generosity, they have decided that we are to find clothes for ourselves and families, and pay our taxes and doctors’ bills; in many of the more remote districts individual planters are to be found who still refuse to recognize their negroes as free, forcibly retaining the wives and children of their late escaped slaves; cases have occurred, not far from Richmond itself, in which an attempt to leave the plantation has been punished by shooting to death; and finally, there are numbers of cases, known to ourselves, in the immediate vicinity of this city, in which a faithful performance, by colored men, of the duties or labor contracted for, has been met by a contemptuous and violent refusal of the stipulated compensation. These are facts, and yet the men doing these things are, in many cases, loud in their professions of attachment to the restored Union, while committing these outrages on the most faithful friends that Union can ever have.

And so it is that mere days after the last Confederate army surrenders, Virginia’s white population is committed to preserving the racial caste system of the South.