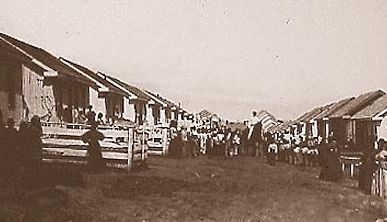 Simon B. Malone was born into slavery on December 18, 1842 in Tippah County, Mississippi. During the war, he fled to freedom when the 5th Ohio Cavalry came through his home county. According to oral history and family tradition, Malone followed the 5th Ohio, making himself useful by caring for soldiers’ horses, fetching water and otherwise performing errands.

Camp Nelson remains open following the end of the war, providing a home for “colored refugees.” Confederate sympathizers yet remain in Kentucky, and this month Malone and some other black soldiers are attacked by “rebels and citizens” while they bath outside the confines of the fort. Captured, Malone soon escapes, albeit suffering a leg injury. Due to injuries, he is discharged from service in the U.S. Army on November 18, 1865.

Moving to Illinois, Malone and his wife Julia (Dillon) are members of the Mount Pisgah Baptist Church following the war. Like many freedmen following the war, Malone makes a living for his family doing odd jobs. He dies in 1925.