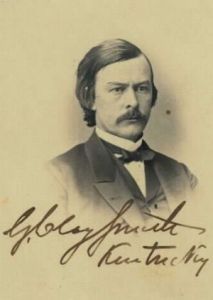 In what proves to be the final hour of the Confederacy, the government authorizes the enlistment and arming of slaves to fight in the Confederate Army. With the signature of President Jefferson Davis, the bill is official.

Although by no means putting an end to the debate in the South over slaves serving in the military, the bill is a clear acknowledgement that government officials recognize that the war cannot be won by white soldiers alone.

The bill, “AN ACT to increase the military forces of the Confederate States,” is known as “General Orders No. 14.”

I. The following act of Congress and regulations are published for the information and direction of all concerned:

AN ACT to increase the military force of the Confederate States.

The Congress of the Confederate States of America do enact, That, in order to provide additional forces to repel invasion, maintain the rightful possession of the Confederate States, secure their independence, and preserve their institutions, the President be, and he is hereby, authorized to ask for and accept from the owners of slaves, the services of such number of able-bodied negro men as he may deem expedient, for and during the war, to perform military service in whatever capacity he may direct.

SEC 2. That the General-in-Chief be authorized to organize the said slaves into companies, battalions, regiments, and brigades, under such rules and regulations as the Secretary of War may prescribe, and to be commanded by such officers as the President may appoint.

SEC 3. That while employed in the service the said troops shall receive the same rations, clothing, and compensation as are allowed to other troops in the same branch of the service.

SEC 4. That if, under the previous sections of this act, the President shall not be able to raise a sufficient number of troops to prosecute the war successfully and maintain the sovereignty of the States and the independence of the Confederate States, then he is hereby authorized to call on each State, whenever he thinks it expedient, for her quota of 300,000 troops, in addition to those subject to military service under existing laws, or so many thereof as the President may deem necessary to be raised from such classes of the population, irrespective of color, in each State, as the proper authorities thereof may determine: Provided, That not more than twenty-five per cent. of the male slaves between the ages of eighteen and forty-five, in any State, shall be called for under the provisions of this act.

SEC 5. That nothing in this act shall be construed to authorize a change in the relation which the said slaves shall bear toward their owners, except by consent of the owners and of the States in which they may reside, and in pursuance of the laws thereof.

In the North, Kentucky U.S. Representative Green Clay Smith, a Baptist layman and champion of the 13th Amendment, is brevetted Major General of Volunteers in Kentucky. Following the war Smith is appointed as Governor of Montana Territory from 1866 to 1869, after which he returns East and pastors churches in Kentucky and Washington, D.C.