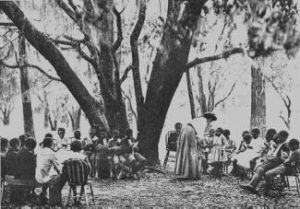 Founded on February 4, 1862, the northern, Christian-based Society provides teachers to educate freedmen. Initially based out of Port Royal, South Carolina, the Society in the ensuing years established schools in other Union-controlled areas such as the District of Columbia; Beaufort, St. Helena, Edisto Island and Charleston (SC); Norfolk (VA); Savannah (GA); and Jacksonville (FL). Of some 220 teachers in total employed by the Society during its existence to date, fifty-four are currently teaching. Teachers are required to be religious, albeit of no particular denomination, and Baptists are well represented.

“Teaching” is a broadly-defined word, as the report notes:

By the word ” teachers ” is not meant those solely who are expected to teach the ordinary branches of school education. Some never enter a school edifice. All are expected to give instruction in those arts of civilized life which the negro needs quite as much as booklearning. Lessons of industry, of domestic management and thrift, lessons of truth and honesty, lessons which may help their pupils (children and adults) to unlearn the teachings of slavery, — these make a part of the system of education which our New-England men and women are striving to introduce into our Southern States. And gladly do we testify to the fidelity, to the large religious sense of the dignity of their calling, which they have manifested.

The report goes on to express appreciation for the recently-formed U.S. Freedmen’s Bureau, noting that the Aid Society may well soon give way to the larger and better funded Bureau.

Responding to criticisms that “negroes” are inferior to whites, the report does not refute the argument as much as explain that enslavement has prevented the black race from achieving as much as possible, even if the highest possible attainment may not be equal to that of whites.

All evidence “a most earnest desire to be educated” and “the importance of educating the freedmen, can hardly be exaggerated. Its results will reach into the future.” Offering a prescient view of that future, the report notes that the “Rebellion” will “soon suppressed, and we shall become again one people. Still, many years will probably elapse, before union will be heartily welcomed by those who will be forced to accept it.”

White southern stubbornness aside, Aid Society leaders sense a bright future for freedmen. Looking forward to the day that black citizens will be allowed to vote, freedmen:

will exercise this right of the free citizen quite as well for the good of the country as do thousands of emigrants whose ignorance and inferiority work no disqualification. It may appear that the same will hold true when comparison shall be made between them and their white neighbors; multitudes of whom have had as little school-knowledge as they have, and whose very small share of political knowledge has been learned in the school of Calhoun and Jefferson Davis.

But however the question in respect to the negroes’ right of suffrage may be settled, thus much is certain; that it is for the interests of a republic, that all who dwell on its soil should be educated. How absurd to utter such a truism, if the millions in question were white men!

The paternalism of white leaders of the Freedmen’s Aid Society, it must be noted, is not directed toward “negroes” alone.