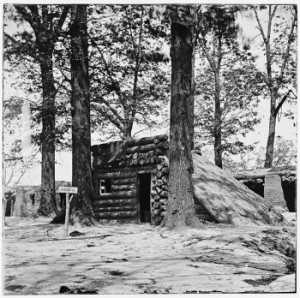 Today in the Petersburg Siege the Battle of Fort Stedman (or of Hare’s Hill) occurs, the last major attempt by the Confederates to break the long-standing siege.

Although Confederate troops initially make progress in the fighting, they are soon driven back by superior Union forces. The battle thus ends as another Union victory.

Although matters outside the purview of the spiritual rarely intrude into local Baptist church records of the South, the Civil War years have proven to be a notable exception. In one regional study of local Baptist congregational records in the state of Georgia, one-third of Baptist churches during the war never mentioned the war, one-third referred to the war only indirectly, and one-third discussed the war quite plainly on at least one occasion.

In North Carolina, the Mount Pisgah Baptist Church falls into the latter category of openly speaking of the war.

March 25, 1865 – W.J. Mitchell, a soldier, in our army asked to be restored to the fellowship. He was restored. His father and the clerk were both requested to inform him accordingly. A letter was also read from Addison Council who is in the army requesting for himself and the country the prayers of the church and proposing as the hour of prayer each Sabbath evening between sunset and dark to which the chuch heartily assented and instructed the clerk to write to Bro. Council and inform him accordingly. A strange soldier Bro. being present requested that himself and wife should be remembered in this hours prayer. He gave his name as Y.H. McAfee. It was ordered by the church that here after all matters of difficulty should first come before the deacons for arrangement and that in the future it would be expected of the deacons to attend to the most of all those matters heard of one attended to by committees. The moderator vacated his seat for a few minutes and addressed Bro. Yates and offered a resolution which he stated that he might reduce to writing and hand to the clerk. Hereafter the substance of which was that as Brother McDade was regularly ordained deacon in the Chapel Hill church as certified in his letter, that for this church. Which resolution was unanimously sustained. As the instance of the clerk he was also requested by the church, to act as clerk of this church in the absence of the present incumbent, Bro. C.R. Scott who was called away to the army. C.R. Scott, clerk – by P.H. McDade.

Note: Before the conference went into session the pastor preached from the text _____ – “That they may rest from their labors”. Rev. 14th C and part 13th V. Our sabbath morning at the close of the sunday school exercises there was a Sunday School prayer meeting in which many other participated the special object was God’s blessing our country. After which the pastor preached and ably set forth the consoling doctrines contained in the text recorded in the first chapter 18 V. Revelations and appointed prayer meeting for next Sabbath at 3 o’clock p.m. at this place.

The Mount Pisgah congregation is not the only one in the South to address the war all the more as the great conflict draws to a close.